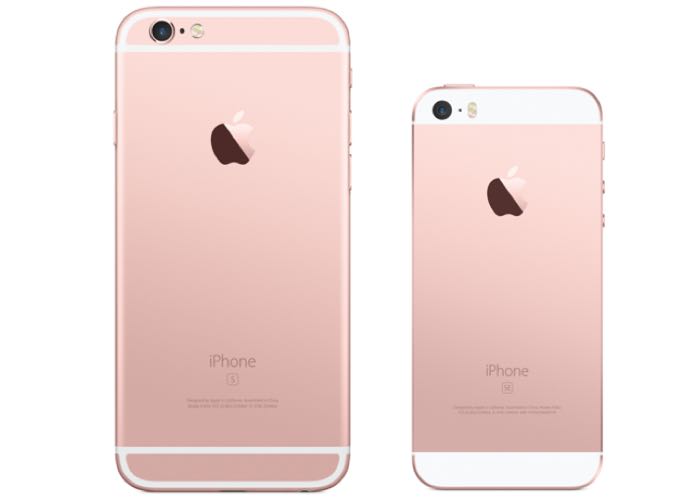 The iPhone 6S and iPhone SE are two completely different smartphones, although the two handsets do share some of the same internal hardware.

The processor and RAM is the same on both devices as is the rear camera, the design of the two handsets is completely different as is the screen size and also the dimensions on these two iPhones.

The iPhone SE and iPhone 6S are two very different devices both in terms of design and price, you can see a list of the key specifications on each handset below, more details are available on each device after the comparison table.

Apple’s iPhone 6S features a 4.7 inch display that has a resolution of 1334 x 750 pixels, it comes with 326 pixels per inch and a contract ratio of 1400:1, it also comes with dual-domain pixels for wide angle viewing and it has a Display Zoom feature.

The display on the iPhone SE is smaller measuring four inches, it also has a lower resolution of 1136 x 640 pixels although it does comes with the same 326 pixels resolution, the contrast ratio on the handset is also lower at 800:1.

The design of the two handsets is completely different, Apples iPhone SE shares a very similar design to the iPhone 5S, where as the iPhone 6S has a more rounded design and it is very similar to the handset it replaced, the iPhone 6.

The two handsets have different dimensions, the larger iPhone 6S is 5.44 inches tall, 2.64 inches wide and 0.28 inches thick it weights in at 143 grams.

The iPhone SE is the smaller of the two handsets and it is also lighter, it measures 4.87 inches tall, 2.31 inches wide and 0.30 inches thick it weighs in at 113 grams.

The iPhone SE comes with Apple’s A9 processor and their M9 motion coprocessor, the handset is equipped with 2GB of RAM and is available in two storage sizes, 16GB and 64GB.

Apple’s iPhone 6S is also equipped with the same A9 processor and M9 motion coprocessor and comes with 2GB of RAM, there are three different storage options in this handset, 16GB, 64GB and 128GB.

If you need a lot of storage on your iPhone, then the iPhone 6s is the only one of the two handsets that offers a 128GB option.

The iPhone 6S is equipped with front and rear facing cameras, on the front of the device there is a 5 megapixel FaceTime HD camera with an f/2.2 aperture and a Retina Flash, it is capable of recording High Definition video in 720p.

The rear camera on Apple’s iPhone 6S is a 12 megapixel iSight camera with 1.22µ pixels it comes with an f/2.2 aperture and supports Apple’s Live Photos feature. The camera comes with a BSI sensor and a Tru Tone Flash plus a five element lens and a Hybrid IR filter.

The rear facing camera on the iPhone SE is the same 12 megapixel camera as used in the 6S, it can record 4K Ultra HD video.

The iPhone 6S and iPhone SE both support Apple’s mobile payment system Apple Pay and the two handsets come with the same version of Apple’s mobile OS, iOS 9.3 which was recently released along with the iPhone SE.

Apple has made the iPhone SE available in the same colors as the iPhone 6S, both handsets come in four different colors, Rose Gold, Silver, Gold and Space Grey.

iPhone 6S vs iPhone SE – Which device is right for you ?

Which of these two iPhone is right for you will depend on a number of factors, for many people price is a major factor in choosing which iPhone to go for, the new iPhone SE comes with much of the performance of the 6S in a smaller package for a lower price.

Display size is also a major factor in choosing between the two handsets, one has a 4 inch display and the other a 4.7 inch display, this may not seem like a large difference paper but when you see the two devices side by side this difference in their size is noticeable.

Design may also play a part in your decision between Apple’s iPhone 6S and iPhone SE, the iPhone 6S comes with a new design, essentially it is a tweaked version of the design that was used in the iPhone 6.

The iPhone SE design is very similar to that of Apple’s iPhone 5S, the handset was released back in 2013 and it was an update design from the iPhone 5 which launched in 2012. Apple has probably used a slightly tweaked design for the SE from the iPhone 5S in order to keep the cost of the handset as low as possible.

Hopefully our iPhone SE vs iPhone 6S guide will help you dtermine which of these iPhones is best suited to your needs. You can find out more information about both of these iPhone’s over at Apple’s website at the link below.

Have a look at out guide on the iPhone 5S vs iPhone SE.