It seems as if Apple may change its App ranking algorithm, which ranks the applications for its Top charts in the App Store. Along with the number of downloads and velocity, it seems app ratings and user engagement also plays a vital role in App Store ranking. App-marketing Firm Fiksu has been keeping an eye on the trends of applications that appear in the Top charts in the App Store. According to Fiksu, Apple is revamping the criteria it uses to rank the applications. 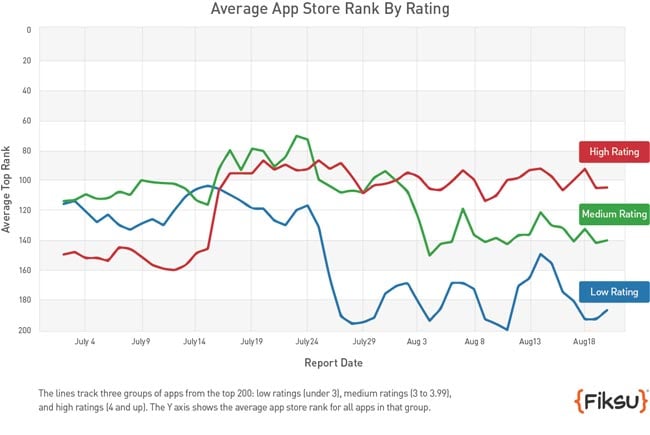 In late July, we first began to notice apps unexpectedly shifting position without a corresponding increase or decrease in downloads. Upon closer inspection, we discovered these position changes correlated with the apps’ ratings.

Previously, the applications we ranked based on two factors: download volume and velocity. In order to rise up in the ranking, the application that must get the maximum number of downloads in a short span of time, while the app must get considerable amount of downloads to maintain that rank. The firm mentions that app ratings also play an important role in ranking the apps in the App Store.

The firm also reports that App Store rank positions that used to update after every 15 minutes now takes a longer time, and updates after every 3 hours. It might get rid of the fake downloads that may take place in the first few minutes after the application is submitted to the App Store.

Niren Hiro of SearchMan also told TechCrunch that user engagement might – the time spent within applications, ongoing usage and the number of apps open – be an important factor when it comes app ranking.

It seems as if Apple is experimenting a new system to improve the app discovery process. There is no official word from Apple about the new algorithm but all the reports suggests that the developers must put more effort to make sure their apps are useful enough to reach the top charts.