I hate April the 1st, there is always one press release or gadget release that catches me out and turns out to be an April fools joke.

The guys over at iFixit have announced that they have been acquired by Apple, of course this is obviously an April fools joke. 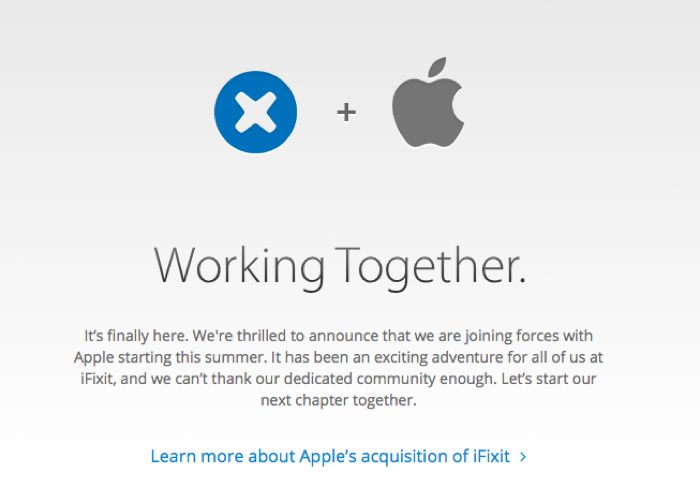 We’re pleased to announce that iFixit has been acquired by Apple!

iFixit is the industry leader in the global repair movement. With more than 10,000 repair guides and millions of community members worldwide, iFixit has become the most trusted source for “before-you-buy” reviews of consumer electronics and “after-it-breaks” repair documentation.

Apple buys smaller technology companies from time to time, and generally does not discuss their purpose or plans. And financial details have not yet been disclosed. But, we at iFixit feel we ought to explain ourselves to our loyal community.

“Everyone has a number”, admitted Kyle Wiens, iFixit’s CEO. “I didn’t think there was a reasonable number that would make me say, ‘You know I was going to change the world with repair documentation but here’s a number.’” In the end, Apple gave us a number that we couldn’t refuse.

But it isn’t just a number for iFixit. As part of the deal, Apple made a commitment to produce the most replaceable electronic devices and personal computers on the market. This is a clear win for the whole iFixit community.

The iFixit guys have replaced their numerous repair guides with a new smartphone replaceability index, funnily enough all of Apple’s devices have score a 10 on the index, you can find out more details below.