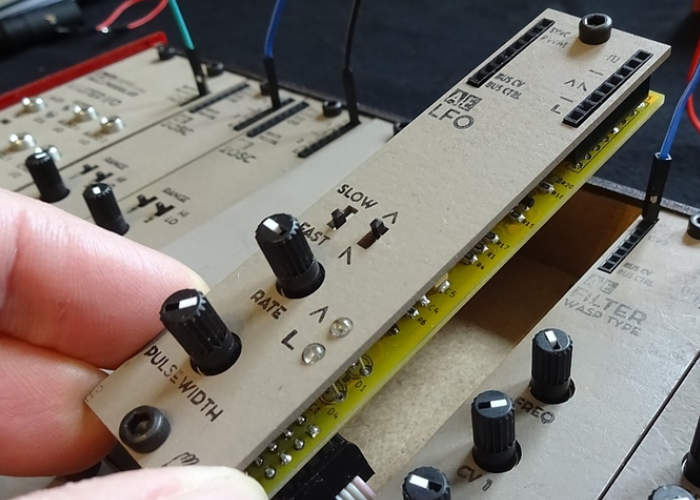 Tangible Waves have this week unveiled a new AE modular synthesizer they have created and launched by the Kickstarter crowdfunding website with the goal of raising €19,000 over the next 30 days.

The true analog modular synthesizer offers an affordable small form factor synth which is “big in sound” say it’s creators. Watch the demonstration video below to learn more about its features, functionality and unique design.

The creators of the modular synthesizer explain a little more about its inspiration and creation :

It started with the idea to build a Lunetta style synth (a synth based on digital logic chips (mis)using them for creating sound, a creation of Stanley Lunetta, therefore the name). For me it is also appealing to have the devices very compact (the KORG Volca series gave me lots of inspiration here), so I defined a small module format (about 10 x 2.5 cm). I liked the concept of abusing electronic parts, which gave the project it’s name (AE: abused electronics).

Over the time I felt the wish to add this or that “conventional” module, like Filter, Envelope, VCA, and one by one I ended up building a “standard” modular synthesizer! Compared to the usual Eurorack Modular Synths, we have some differences here, mainly to get a small form factor and cutting the price:

-- Modules are not Eurorack compatible
-- The Oscillators module is not working in 1V/octave standard (due to the roots in the Lunetta approach); but a 1V/octave VCO will be added soon to the modules palette
-- Patching is done via simple patch-wires and small pin-sockets (not minijack-cables as in the eurorack-world); this cuts the cost drastically and also saves a lot of space on the module. Another advantage: Module outputs are mostly dual or triple, which makes “Multiples” modules obsolete

Generally, AE modular follows the “not-so-perfect” approach; circuits are sometimes simplified and show their own character in some points – it’s intentionally a contrast to the high-polished stuff we get from digital synths / DAWs / plugins. But always the usage as an artistic tool is considered!

Visit Kickstarter via the link below for full specifications and the ability to preorder with pledges starting from €385 with shipping expected to take place during January 2017.