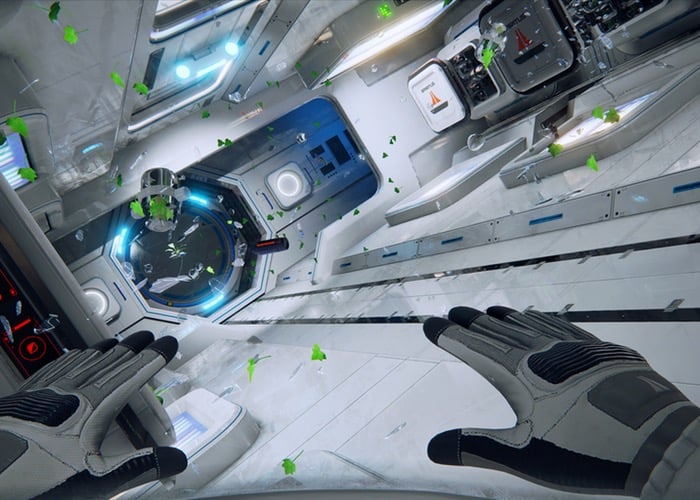 The new first-person space survival game Adr1ft which has been specifically developed to be used in conjunction with the awesome virtual reality Oculus Rift headset, has this week revealed a quick view of some gameplay during Sony’s Keynote presentation over the weekend.

Even though Adr1ft has been specifically designed to be used with the Oculus Rift virtual reality headset it will also be available to play without on PC, PlayStation 4 and Xbox One consoles.

Within the Adr1ft game players need to traverse a wrecked space station orbiting above the earth in a similar scenario to that of her recent Gravity movie that starred George Clooney and Sandra Bullock.

Adr1ft has been created by ex-Microsoft Studios creative director Adam Orth who learnt about Twitter and social media the hard way, back in 2013. Adr1ft made it’s world premier live onstage at The Video Game Awards in Las Vegas. Earlier this year the team announced :

“We are very excited to announce that we have been working with Cory Schmitz on ADR1FT. Cory is an amazing and talented graphic designer who has created iconic work for Sony Computer Entertainment, Polygon, Double Fine Productions, Capy Games, Sony Santa Monica, Naughty Dog, Horizon, The Verge, and 17-BIT. Cory has also appeared in/on Wired, Rolling Stone, The Verge and Kotaku to name a few.

Cory has created the official logo for ADR1FT and is adding his unique and beautiful visual style to the game itself. We feel very lucky to be added to the incredible list of artists, companies and publications Cory has chosen to work with and we can’t wait to show you what we’re doing together next.”

For more information on the new Adr1ft game jump over to the threeonezero website for details.