If you are one of the lucky ones who already has received your new $35 Raspberry Pi computer. You might be interested in this new Raspberry Pi Prototyping Pi Plate Kit which has been built by Adafruit.

The new Raspberry Pi Prototyping Pi Plate allows you to use your Raspberry Pi computer to make embedded computer projects. It consist of plate that snaps onto the Pi PCB (can be removed at a later date if you wish) and opens up all sorts of prototyping possibilities. 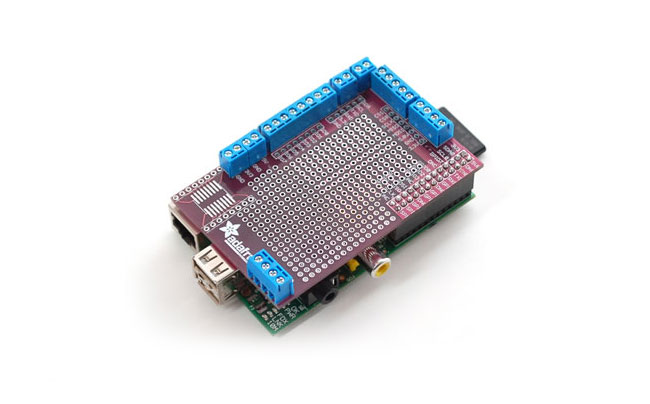 Along the edges of the proto area, all the GPIO/I2C/SPI and power pins are broken out to 0.1″ stips so you can easily connect to them. On the edges of the prototyping area, all of the pins are also connected to 3.5mm screw-terminal blocks. This makes it easy to semi-permanently wire in sensors, LEDs, etc. Finally, we had a little space remaining over the metal connectors so we put in an SOIC surface mount chip breakout area, for those chips that don’t come in DIP format.”

If you have not heard about the new $35 Raspberry Pi computer that, taking the world of hobby computing by storm. The Raspberry Pi is a single-board computer developed in the UK by the Raspberry Pi Foundation, and has been designed with the aim of teaching basic computer science in schools.

The Raspberry Pi computer is based on a Broadcom BCM2835 system on a chip (SoC), which includes an ARM1176JZF-S 700 MHz processor, VideoCore IV GPU, and 256 megabytes of RAM.