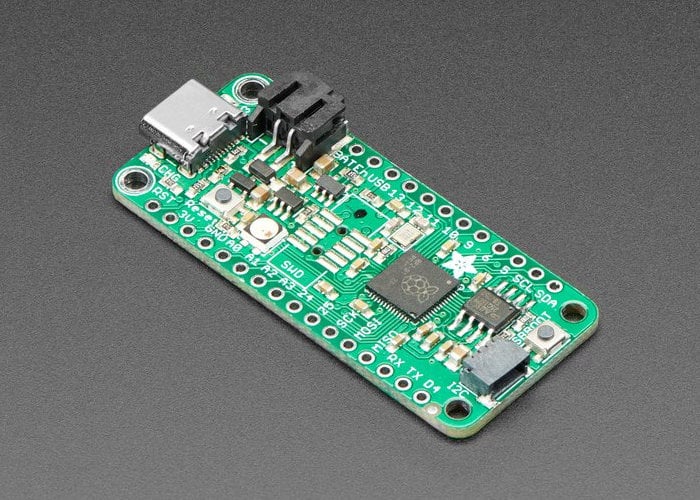 “Inside the RP2040 is a ‘permanent ROM’ USB UF2 bootloader. What that means is when you want to program new firmware, you can hold down the BOOTSEL button while plugging it into USB (or pulling down the RUN/Reset pin to ground) and it will appear as a USB disk drive you can drag the firmware onto. Folks who have been using Adafruit products will find this very familiar – we use the technique on all our native-USB boards. Just note you don’t double-click reset, instead hold down BOOTSEL during boot to enter the bootloader!

The RP2040 is a powerful chip, which has the clock speed of our M4 (SAMD51), and two cores that are equivalent to our M0 (SAMD1). Since it is an M0 chip, it does not have a floating point unit, or DSP hardware support – so if you’re doing something with heavy floating-point math, it will be done in software and thus not as fast as an M4. For many other computational tasks, you’ll get close-to-M4 speeds!”

“A new chip means a new Feather, and the Raspberry Pi RP2040 is no exception. When we saw this chip we thought “this chip is going to be awesome when we give it the Feather Treatment” and so we did! This Feather features the RP2040, and all niceties you know and love about Feather”