When OnLive was first announced, the gamut of reactions went all the way from derision to denial. Surely if streaming a game to people’s screens without going through the whole malarkey of buying a kitted out behemoth of a console and discs at 50 quid a pop could be done, someone would have done it already. Not only that, but what of the bane of multi-player games, which would now rear its ugly head in single player as well – lag? Rivers of pixels were expended explaining in painstaking detail exactly why OnLive would never ever work. OnLive hit back, claiming revolutionary proprietary technology.  It turns out that in a rare twist, however, everyone was right. 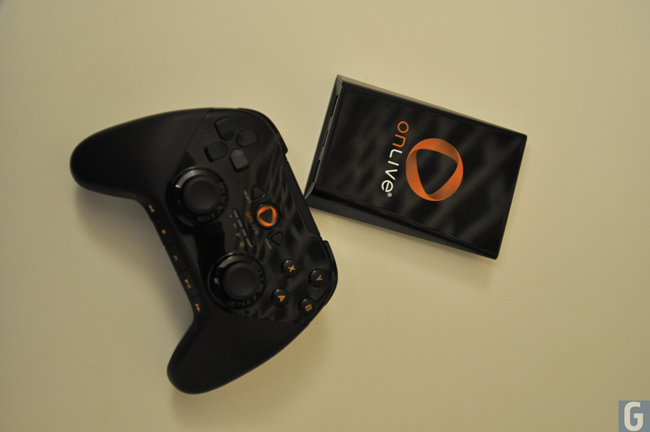 The Micro-Console comes in swanky black and orange packaging, every inch and aspect of which, from patterned box to triangular cable boxes, screams quality. Included beside the surprisingly sturdy and well designed controller are HDMI, Ethernet and Micro USB cables. Perhaps this is a good time to remind the gentle reader that the PS3 still comes with component cables as standard. Just putting that out there.

OnLive’s biggest liability is that it’s not in control of its own destiny. It’s completely dependent on your ISP to deliver a competent experience.  It’s heartening, however, to know that whatever aspects of its business model OnLive can exert control on have been not only well taken care of, but polished to a blinding shine.

Setup was a cinch, as we’d previously set up our account on a PC, which we heartily recommend. Short of plugging in the cables, the only hassle would be finding a longer Ethernet cord, the one included most likely won’t be able to make the trek to the nearest router. WiFi is out of the equation, not as a cost-cutting measure, but because connection speed is paramount to a streaming service and cables still hold the advantage there.

The UI is simple and elegant with shallow (in a good way) and well thought out menus that take no small amount of inspiration from the Xbox dashboard’s current panels.

OnLive could have just rested on its main claim to fame and provided a streaming game subscription service. There wasn’t really a good reason for providing anything extra and definitely nothing as elaborate as its spectator component. Forget being able to watch thousands of people play and the golden research opportunity here for game designers of all stripes. There is a seriously understated and undervalued aspect to the OnLive spectating experience that we predict will one day become a ubiquitous part of any online gaming service: cheers. While you’re playing, other OnLive members, including friends, can watch and congratulate you for doing a good job. The first time that happens to you, you’ll see why it’s a big deal.

OnLive has a fairly clever offer in place to tempt newcomers, practically giving away the first game on the platform. You still need to pay one quid for it, but it’s about twenty times less than what most people would consider an impulse purchase. We jumped straight into Space Marine and the results were… heartbreaking.

The good news is that it can be everything you thought it would be. Piping hot game streaming through a box the size of a DS makes for an Arthur C. Clarke-esque technological spectacle. But if you plan on maintaining a positive outlook pas the first twenty seconds or so, you’d better be packing at least a 40 Mb line. This thing is not joking around.

OnLive took one look at our 20 Mb Sky Unlimited line and started laughing so hard it forgot to render about half the screen. Controller input was fine for the most part, but we suspect a lot of that had to do with the button mashing nature of our chosen test game. The OnLive Micro Console would probably be exiting the window of any half decent Street Fighter IV player at a respectable velocity within ten minutes.

The whole experience reminded us of nothing so much as playing a game on a just barely good enough PC. Thrifty PC gamers will know that feeling all too well and may even tolerate it by now. Sure, you get a hop and a skip every 30 seconds or so and the textures all look like the equivalent of water boarding for art directors, but at least you get to play it. Will it jive with the console gaming public at large, however? Not on your life. Not when texture pop in turns into game pop in and every third controller input is sent out via Royal Mail.

At £7 per month, eschewing the 70 pound Micro Console, it’s the cheapest deal in gaming. Unfortunately, unless you live in an area covered by super fast broadband, until the Internet infrastructure catches up to modern times, however, there’s still no such thing as a free lunch, nor indeed even a cheap one.