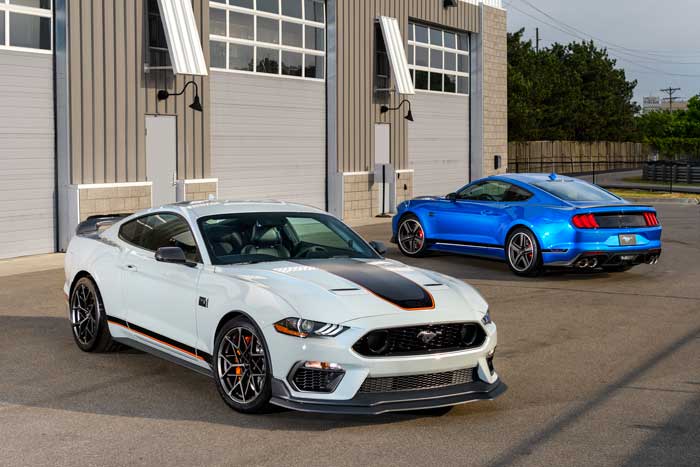 Ford also says that the car has a unique front in a host of Ford Performance parts. The vehicle comes standard with a Tremec 3160 six-speed manual transmission, the same transmission used in the Shelby GT350. The transmission is fitted with a rev-matching system and is paired with the oil cooler system from the GT350 along with a twin-disc clutch from the standard Mustang GT and a short-throw shifter.

The 2021 Mach 1 will be available with a 10-speed SelectShift automatic transmission featuring an upgraded torque converter and unique calibration. The automatic will feature a second air-to-oil cooler to increase cooling capacity by 75%. The car will roll on new 19-inch by 9.5-inch and 19-inch by 10-inch wheels that are meant to be a modern version of the Magnum 500 style wheels from the Mach 1 of yesterday. Six-speed buyers will also be able to get a Handling Package, and an exclusive color will be available with cars fitted with the Appearance Package called Fighter Jet Gray. Other color options include Iconic Silver, Shadow Black, Oxford White, Velocity Blue, Twister Orange, Race Red, and Grammar Yellow. The car will land in the spring of 2021 at an undisclosed price.