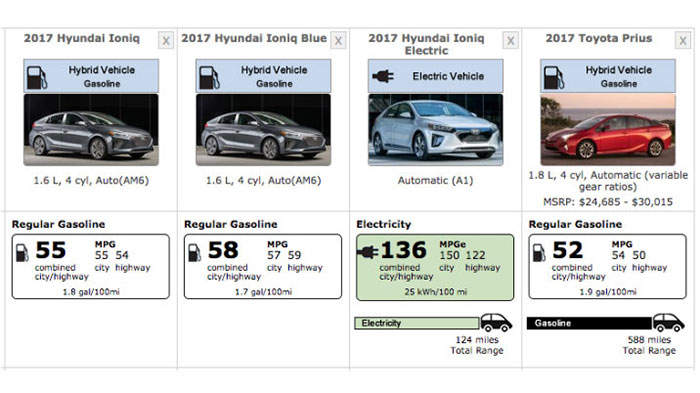 The EPA has officially given the Hyundai Ioniq line its fuel economy ratings. The least efficient of the entire three model range is the standard Ioniq hybrid that gets 55 mpg city, 54 mpg highway for 55 mpg combined. The most efficient with a gas engine under the hood is the Ioniq Blue.

That hybrid vehicle is good for 58 mpg combined with 57 mpg in the city and 59 mpg on the highway. The Ioniq Electric was rated for 150 MPGe city and 122 MPGe highway with 136 MPGe combined. The EPA says that the total driving range for the electric version is 124 miles.

That driving range isn’t exactly stellar compared to a Tesla, but it is better than the Chevy Bolt. As for the hybrid models, the Toyota Prius is good for 52 mpg combined making it less efficient and much uglier than the Hyundai offerings.