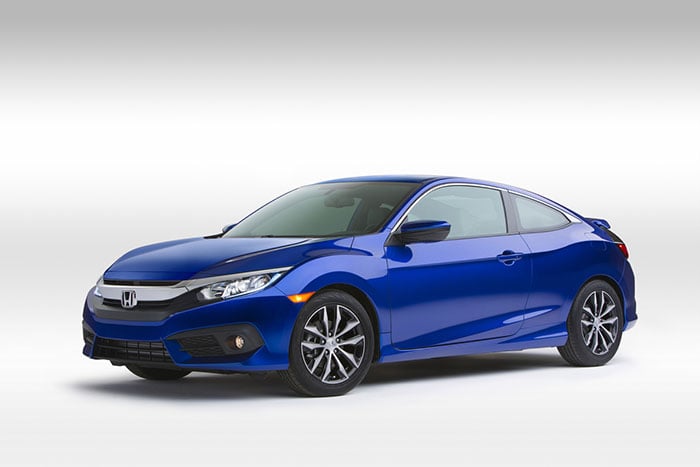 With the LA Auto Show underway, there are hoards of new and updated cars that are being seen for the first time. One of those debuts is of the new 2016 Honda Civic Coupe. The 2016 is the tenth generation Civic and it will hit dealerships in March. The new car has a different design on the outside with a lower roofline, more compact form, and a signature taillight design.

Buyers will get to choose from two different engines with one being the first turbo Honda engine for a Civic coupe. The infotainment system inside the car supports Android Auto and Apple CarPlay and has a new Honda nav system available that is made by Garmin. While the car is more compact, it gains 8.4 cubic feet of interior space and 5-inches more rear-seat legroom.

The lower level trim Civic coupes get a new 2.0L DOHC i-VTEC engine making 158hp and 138 lb-ft of torque, a gain of 15hp and 9 lb-ft from the 1.8L in the previous generation Civic. The car is expected to get fuel economy of 41mph on the highway and 31 in the city. The 1.5L turbo will make 174hp and 162 lb-ft of torque and get 42mpg on the highway and 31mpg in the city. Pricing will be announced closer to launch.