A new 200 inch display has been unveiled that shows video from 57 different angles, enabling people to walk around in front of the screen and see behind corners or objects as they are shown on the screen. The amazing new full HD glasses-free 3D display has been developed by NICT, in collaboration with JVC Kenwood and is a great example of how display technology is being pushed to its limits.

The 200 inch screen weighs in at 500kg and consists of a condenser lens which focuses the light creating a sharp image, and a special diffuser film which lowers the horizontal diffusion angle, creating a smooth transition between the different viewing angles. Watch a video after the jump to see the screen in use. 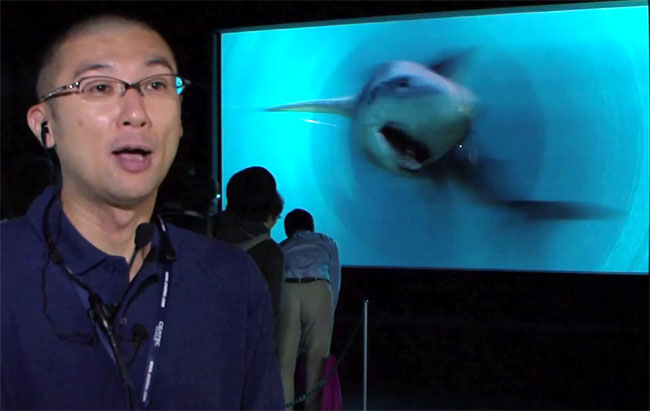 “This display lets you watch video from 57 different angles. And no matter which angle you’re viewing from, you can see a Full High Definition resolution image. With an ordinary display, the viewing range is basically around 180 degrees, but with this one, it’s 13 degrees, which is very narrow. But within that range, for example if you look from the right edge, and from the left, you can see the picture from different angles. So for example, if you’re looking at a square box, you can see the sides at well.”