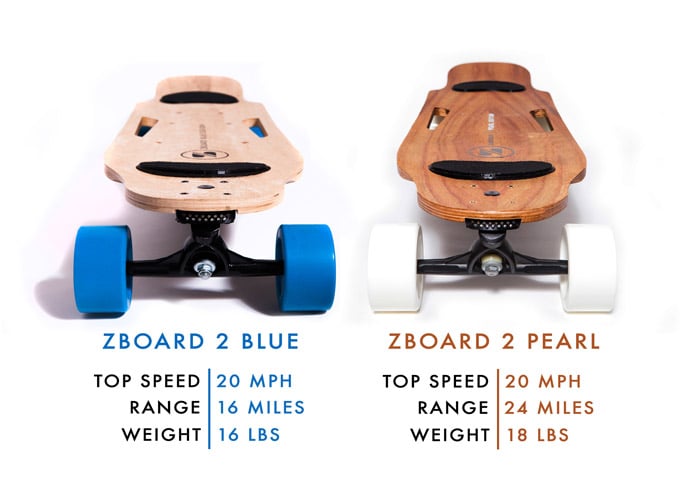 Way back in 2012 we talked about the original Zboard electric skateboard that helped people get around and have fun. A new version of that skateboard has hit Indiegogo and this time out it has a much longer driving range. The Zboard 2 has up to a 24 mile range per charge if you buy the Zboard 2 Pearl model. The standard Zboard 2 Blue model is good for 16 miles per charge.

The difference between the two appears to be the battery size with each good for a top speed of 20mph. Both versions use new 500W brushless motors that are faster and more efficient than previous motors. The brushless motors also allow the rider to push and coast naturally, when the battery is off. The Zboard 2 Blue weighs 16 pounds.

The project is on Indiegogo seeking $50,000 for funding and raised over $239,000 with 16 days to go. Zboard models aren’t cheap with the Blue selling for $949 and the Pearl selling for $1149. Both models have a $30 shipping charge and shipping is expected in July 2015. Both models do have head and tail lighting for visibility in low light conditions.