The Verge recently put together a very detailed list and outline of the next generation consoles that have recently been released, and I thought I’d bring their results to you. Hopefully this factual spec sheet comparison will give you the information you need to make an informed decision. 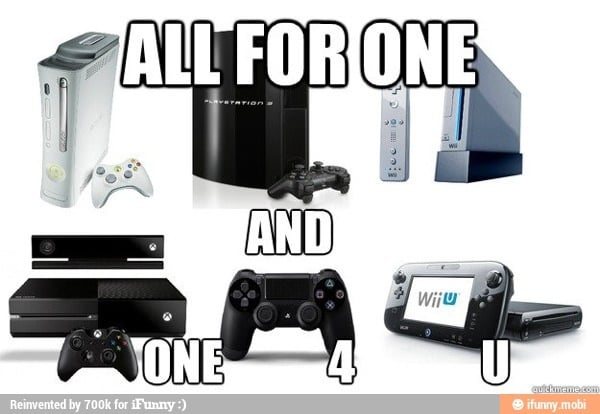 Let’s start by eliminating one console right off the bat: the Wii U. It’s inferior to the other two in every way except price point. At $299 you basically get what you pay for, an inferior machine that’s pretty much stuck in the past. Nintendo’s trying to make up the difference by providing a ‘unique gaming experience’, but even the PS4 and Xbox One support motion-based gaming at a higher quality than the Wii U.

The spec sheet shows two extremely similar machines when you take into account the Xbox One and the PS4. They essentially has the same eight core CPUs and AMD GPUs, although Xbox One reportedly has a bit better CPU while the PS4 has a harder working GPU. They both support up to 1080p resolution too. The only other hardware difference is that the PS4 is Bluetooth-enabled and the Xbox One has one more USB port.

The software is where the war gets really interested. Microsoft has already stated that its processing power won’t be 100% dedicated to gaming. Some of it will always be used to run background functions. Sony hasn’t said whether their device works similarly or not. Essentially, the PS4 has a graphical advantage – made clear by the fact that Call of Duty: Ghosts runs 1080p on the PS4 while it only runs at 720p on the Xbox 360.

So, which one are you going to get?