The Research Department at Japan’s Ministry of Defence has this week unveiled their new creation which is apparently the the world’s first spherical flying machine, and immediately reminded me of the flying ball drone from Star Wars.

The flying ball drone has been designed to hover like a helicopter, and take-off and land vertically from any terrain. The benefit of the ball shape allows the craft to fly forward at high speed using wings, which a helicopter can’t do. Watch the video after the jump to see it in action and its features explained. 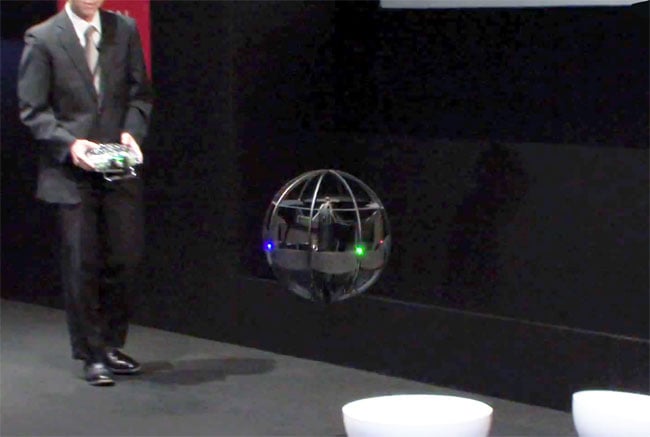 “Because the exterior is round, this machine can land in all kinds of attitudes, and move along the ground. It can also keep in contact with a wall while flying. Because it’s round, it can just roll along the ground, but to move it in the desired direction, we’ve brought the control surfaces, which are at the rear in an ordinary airplane, to the front.”

The flying ball drone costs around $1500 to make and weighs just 350g and measures 42 cm in diameter and is constructed from commercially available parts.