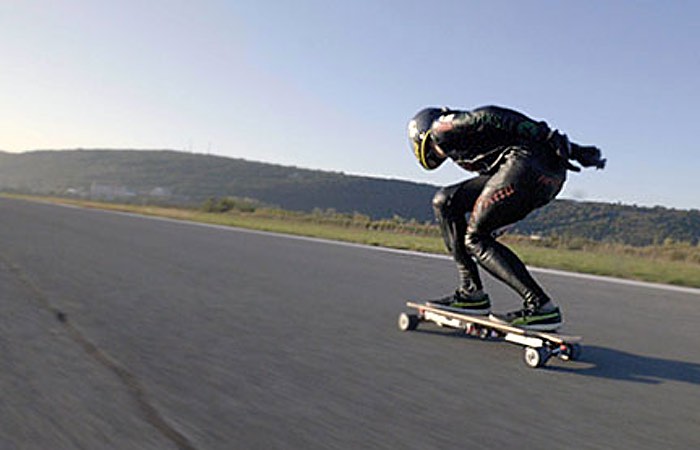 Mischo Erban has recently set a new world record by setting a new faster speed on an electric skateboard, reaching speeds of 95.83 km/h or 59.55 mph on a modified longboard called the NEXTBoard.

The NEXTBoard Has been two years in development and is powered by a four-wheel-drive system that is equipped with four Scorpion motors one attached to each wheel together with and two Tattu 6S batteries in series underneath the deck.

Check out the video below to see the 32-year-old skateboarder mentally few attempts at setting the new world record with a few spills along the way along a runway while controlling the board’s power and speed with handheld remote control.

Once the Guinness World Records title had been confirmed, Mischo explained :

Guinness World Records helps drive innovation and individuality. Before GWR, people and companies were kind of locked into previously existing competitions and disciplines, but then the dynamism of record breaking opened up a space and let us go into new directions. And I like setting new directions and achieving!

For more information on the new Guinness World Record jump over to the official website for details via the link below.