The iPhone DevTeam has just released Quickpwn 2.1 for Windows. 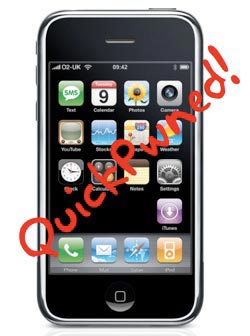 The QuickPwn for windows supports the latest iPhone 2.1 firmware, with the jalbreaking and unlocking of the 2G iPhone.

It also supports the jailbreaking of the 3G iPhone and the 1st generation iPod touch.

The Windows Quickpwn 2.1 does not support the unlocking of the 3G iPhone of the jailbreaking of the 2nd generation iPod Touch.

Head on over to the iPhone DevTeam’s website for full details.

Update 11th October – New features have been revealed in iPhone 2.2.

Update 20th October – It looks like the iPhone Dev Team are getting closer to a 3G iPhone Unlock.

iPhone Dev Team getting closer to a 3G iPhone unlock