For the first time since its launch Windows 7 has now passed its older Windows XP operating system to take the crown as the most used OS worldwide. The new figures released by Statcounter revealed that Windows 7 accounts for 40.21% of the global desktop operating system usage, with Windows XP slipping down to 38.64%.

When Microsoft released Windows Vista the  predecessor to Windows 7 and a successor to Windows XP, it didn’t grab users attention as much as Microsoft would have hoped and struggled to gain any user momentum. Mainly due to its very bloated installation, sluggish performance and its over intrusive security measures. 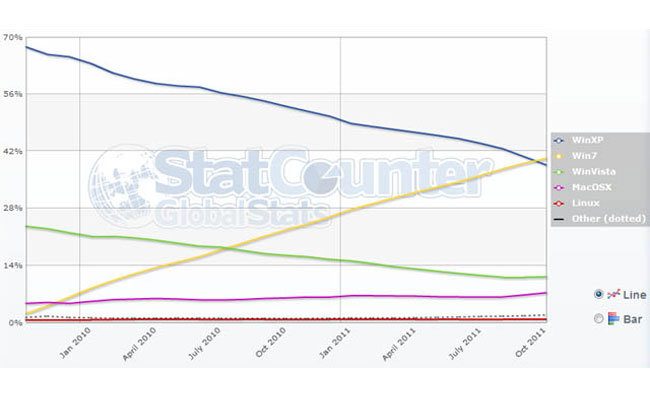 However when Microsoft first launched its Windows 7 operating system the story and performance was a little different and it managed to sell 240 million copies in the first year. Gartner believes that 42% of all PCs worldwide will run Windows 7 by the end of 2011.

Their statistics also indicates that 94% of new PCs will ship with Windows 7 in 2011, and nearly 635 million new PCs worldwide are expected to be shipped with Windows 7  by the end of 2011. Let’s hope Microsoft’s new Windows 8 operating system will be held to set a similar trend.