To think we ran a story about this a few days ago. (Read it here.) For reasons unexplained, the German author of the sensational/opportunistic ebook about the currently brewing Wikileaks war has vanished from Amazon’s shelves. 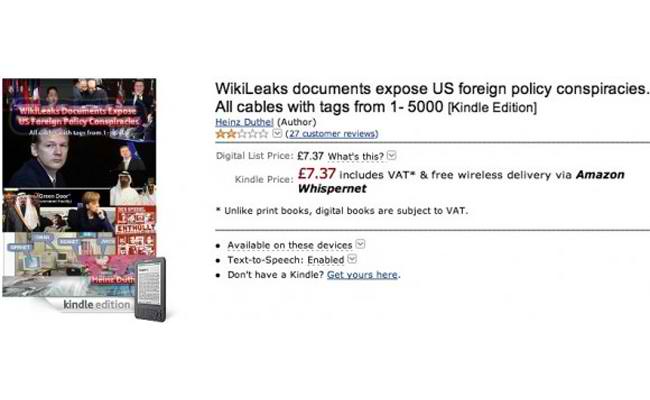 But matters aren’t as straight cut as they seem, with a minor conspiracy surfacing about the exact circumstances of the ebook’s sudden pullout. What’s really odd about this bit of news is a spokesperson from Amazon clarified that it wasn’t them who pulled the ebook, though they did publicly deny Wikileaks the use of their servers awhile back.

In fact, the “Wikileaks Documents Expose US Foreign Policy Conspiracies” ebook itself is a bit misleading since its content is more of a commentary on Wikileaks than a compilation of classified documents, which its title implied. Author Heinz Duthel claimed that he removed the book himself after receiving threats.

The absence of the ebook hasn’t exactly kept Amazon safe from further controversy since it was targeted by Operation Payback. But the move from the Anonymous hacker army dissipated, resulting in diverted attacks on PayPal instead.

To further fudge matters, the ebook author had a change of heart and put his work back on sale. Go figure.