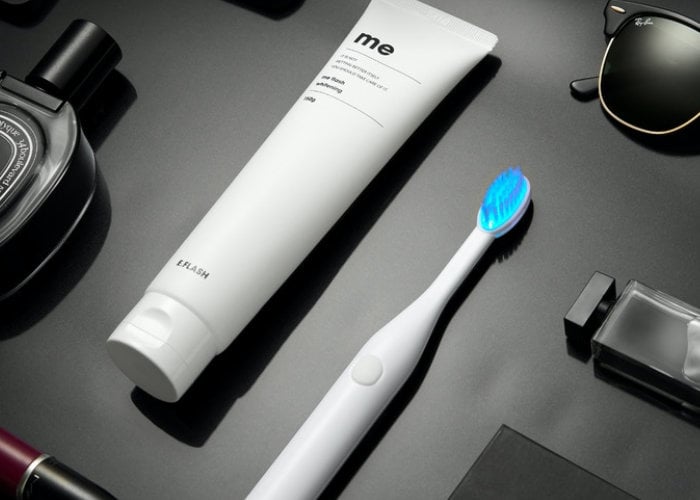 E:Flash is a unique tooth whitening toothbrush which uses blue LED light technology to help heal games, eradicate bacteria and help whiten your teeth, all during a short three minute brush cycle. watch the demonstration video below to learn more about the unique E:Flash toothbrush , now available via Kickstarter with early bird pledges starting from just £28.

“Amazing things happen when the E:Flash’s blue LEDs and the E:Flash whitening toothpaste work together. The blue LEDs’ 470-nm-wavelength light helps the whitening agents penetrate pores on your teeth, remove stains from the surface, kill and curb oral bacteria. The LED also helps care for the gaps between the teeth, the triangular areas between the teeth and gum is where plaque is often left, and unreached by whitening agents.”

“With DermaPro, we tested it to see if it really is an effective whitener. The results showed that the whitening effects became visible in seven days. It also helped reduce bacterial growth. The testers found it effective for curbing bad breath, and 95.45% had a reduced affect in sensitivity. Brushing both sides of the teeth ten times takes three minutes. If you’re done in less than three minutes, that just means you haven’t really brushed them all. It also means that food residue may still be left behind, which may cause tooth discoloration, germ growth, and bad breath.”