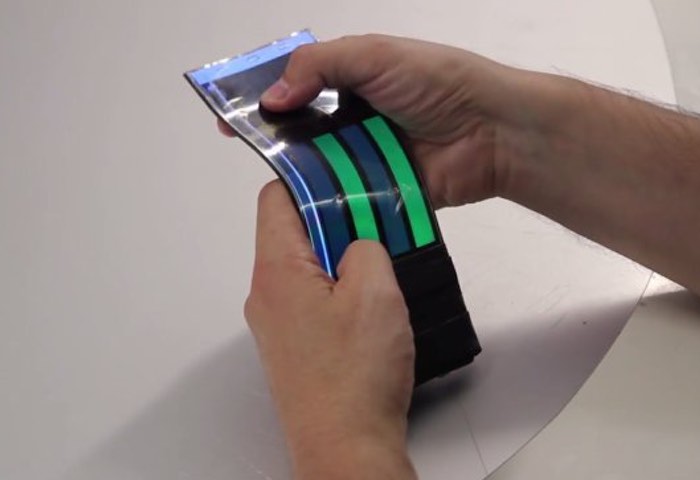 This month a research team from Queen’s University’s Human Media Lab have unveiled a new bendable smartphone prototype they have developed in the form of the WhammyPhone.

Equipped with a flexible OLED display that offers users a resolution of 1920 x 1080 pixels, the WhammyPhone uses a sensor to enable the operating system to recognise when the hardware is bent. Watch the demonstration video below to learn more.

The WhammyPhone has been showcased and is being demonstrated in Tokyo, Japan. During the conference in Human-Computer Interaction, ACM UIST 2016, on Monday October 17th 2016.

KINGSTON – Researchers at the Human Media Lab at Queen’s University have developed the world’s first musical instrument for a flexible smartphone. The device, dubbed WhammyPhone, allows users to bend the display in order to create sound effects on a virtual instrument, such as a guitar or violin.

“WhammyPhone is a completely new way of interacting with sound using a smartphone. It allows for the kind of expressive input normally only seen in traditional musical instruments.” says Dr. Vertegaal.

WhammyPhone features a Flexible Organic Light Emitting Diode (FOLED) touchscreen display that shows keys that can be used to play sounds on sound synthesis software running on a computer. Like the ReFlex flexible smartphone, WhammyPhone is also equipped with a bend sensor, which allows for the user to bend the phone as a means of manipulating the sound.

Dr. Vertegaal demonstrates a number of applications for the new functionality of the WhammyPhone. The bend input can be used to simulate bending a string on a virtual guitar, providing Hendrix’ style feedback sounds. In another example, the phone is used to simulate the bowing of a simulated violin. Here, the bending of the phone provides the same kind of experience as exerting pressure on a real bow. A final example shows how WhammyPhone can be used to control loops in Electronic Dance Music, making it more intuitive for DJs to interact with their instruments.