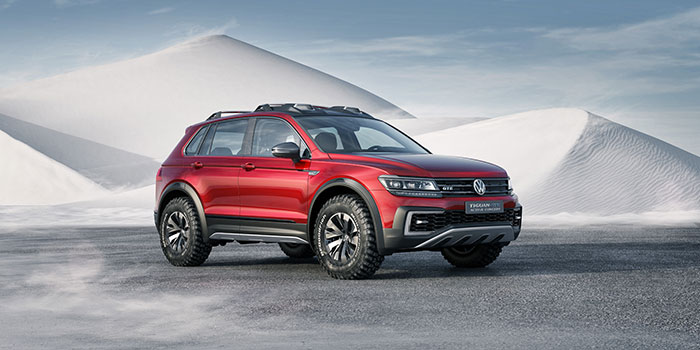 VW is showing off a new concept SUV in Detroit this week and the car looks really cool. It’s called the VW Tiguan GTE Active Concept and it is the first VW SUV to use the Modular Transverse Matrix and is based on the second generation Tiguan. Power comes from a plug-in hybrid system making 148hp from an gas engine and it has a pair of electric motors.

The concept can go 20 miles on electricity alone and has an advanced 4Motion active control system for off-road use. VW says that the 4WD system in the vehicle can offer 4WD capability in all-electric mode. The second generation Tiguan will arrive in the US in 2017 with a longer wheelbase and 7-seat capability.

The gas engine is a turbo direct-injection unit making 148hp and 184 lb-ft of torque. The two electric motors make 54hp for the front and 115 hp at the rear for total system output of 221hp. Power comes from a 12.4kWh lithium-ion battery. Different driving modes allow the concept to be AWD, FWD, or RWD as needed. VW fits the car with a coasting function that shuts down the engine, motors, and disengages the drive train to allow the battery to charge.