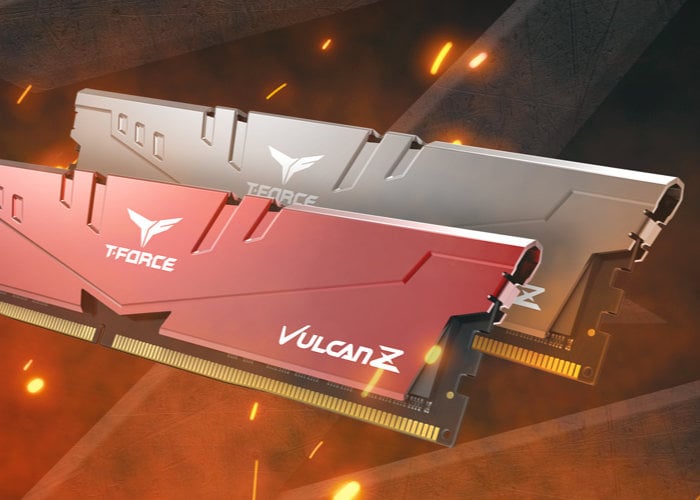 Team Group has introduce three new additions to its range in the form of the T-Force gaming series: T-Force T1 gaming memory, T-Force VULCAN Z gaming memory and T-Force VULCAN high speed gaming solid state drive. Unfortunately, no information on pricing or worldwide availability has been released as yet, but as soon as information comes to light, we will keep you updated.

– T-Force Vulcan Z is the new gaming memory released by Team Group. Made by a 0.8mm thick, one-piece alloy aluminum with superconductivity – thermally conductive adhesive, it is able to completely enhance the effect of heat dissipation and protect the memory, so the memory can operate with excellent efficiency and stability. VULCAN Z gaming memory’s IC chips are selected through rigorous tests. Every memory is tested for complete compatibility and stability. It supports both Intel & AMD, offering gamers a memory with exceptional quality, optimal performance and excellent compatibility.

– Focusing on how to present the detail of the texture, T-FORCE VULCAN high speed gaming SSD has an exquisite, lightweight and compact aluminium alloy case. T-FORCE’s exclusive LOGO in the middle shimmers in an unique style. T-FORCE VULCAN high speed gaming SSD has an standard 2.5″ form factor with only 7mm in height. It uses 3D NAND flash memory chip. Maximum up to 1TB of capacity is available and the read speed is up to 560 MB/s, which shows its exceptional performance. Whether it is for laptop or desktop, the upgrade can be done in a blink of an eye, and you are one step ahead of everyone else.

For more details on each of the new components unveiled by Team Group this week jump over to the official product pages by following the links below.