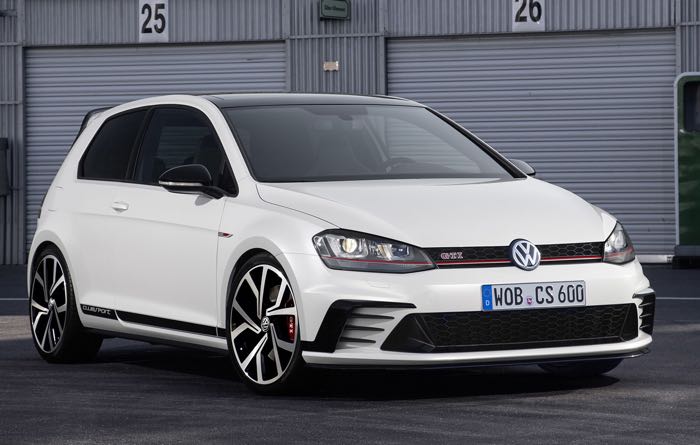 Volkswagen has announced a new version of their Golf GTI, the Volkswagen Golf GTI Clubsport, which is launching to celebrate the 40th anniversary of the Golf GTI.

Not only has Volkswagen given the anniversary model’s engine more power, it has also extensively revised the design, equipment and aerodynamic fine-tuning of the anniversary model. Due to the high power output and significantly improved downforce, the dynamic performance of the Golf GTI Clubsport propels it into the domain of top-class motorsport. This results in groundbreaking handling properties at high speeds and breathtaking cornering speeds.

The Golf GTI Clubsport is painted in “Oryx White” (other colours available); as a contrast, the roof area comes in black. The Volkswagen exterior designers created a completely new front bumper, new side sills, a new rear diffuser, a new multi-part roof spoiler and exclusive forged alloy wheels for the anniversary model. These features immediately make the anniversary model stand out from the familiar GTI models.

It features a 2.0 litre engine that has 261 horsepower and it also features a boost function which can increase the engine power to 284 horsepower.

You can find out more details about the new Volkswagen Golf GTI Clubsport over at VW at the link below.