With Apple WWDC 2013 just around the corner I thought it would be fun to show you how easy it is to upgrade an older MacBook Pro purchased back in 2011 with a sparkling new solid state disk (SSD) in the form of a Samsung 840Pro SSD.

My MacBook Pro has been a workhorse the last couple of years but recently has started to show it age and I felt it needed a little help to give the notebook a few more years use and see the investment I initially spent on the Macbook Pro stretch a few more years. 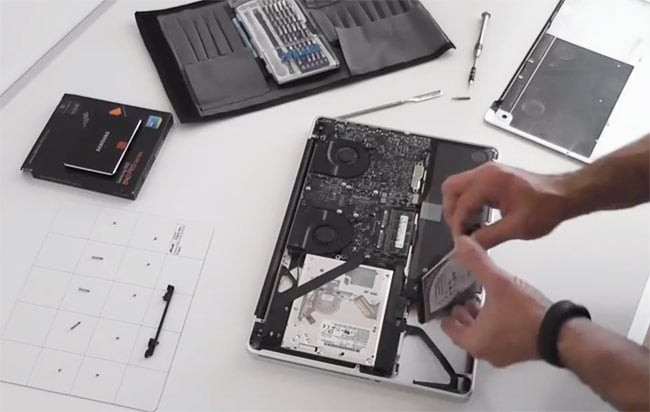 The whole process of upgrading the old HDD to the new Samsung SSD from start to finish took around 10 minutes to complete, without installing the operating system. But having the correct tools at hand makes the job even easier, and I recommend getting an iFixit tool kit or similar if you are thinking of carrying out numerous upgrades to devices in the future and you don’t already have the tools required.

Once the Samsung 840Pro solid state disk (SSD) was installed and a Apple latest Lion OS X installed on the system with my backup installed from Time Machine. The speed differences were easy to see with faster boot times and faster access to files and applications with load times being greatly improved over the older 500GB HDD.

The Samsung 840Pro SSD is currently a flagship solid state disk in the Samsung range but there are cheaper Samsung and other manufacture SSD drives available to suit your budget.

For more information on the new Samsung 840Pro SSD I used to upgrade my MacBook Pro jump over to the Samsung website for details, and Samsung is currently running a competition to win a new Samsung solid state disk (SSD) over on its Facebook page.

Watch this video on YouTube.
Filed Under: Geeky Stuff