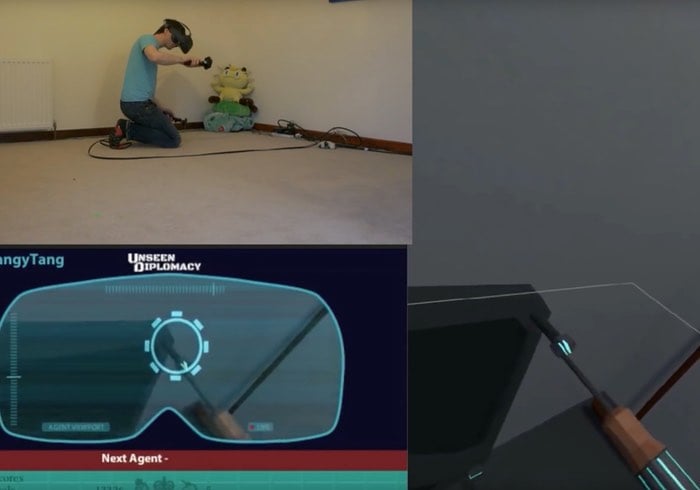 Triangular Pixel has released new gameplay footage for its new upcoming virtual reality game Unseen Diplomacy which as you can see in the demonstration videos below makes use of an entire room to provide an immersive VR experience during gameplay.

Unseen Diplomacy was first unveiled back in October of last year at the GameCity festival in Nottingham and is now being developed as a title for the HTC Vive VR headset which is currently available to preorder priced at $799.

Unlike the Oculus Rift the HTC Vive headset also uses room-scale VR allowing players of the Unseen Diplomacy game to walk and crawl around the virtual environment and uses a number of tricks to make participants think they are moving further than just the boundaries of the room. Check out the gameplay videos below to learn more about how this is accomplished.

Unseen Diplomacy developers explain more about the inspiration and design the game.

We based it on the Hatton Garden Heist. There’s some interesting game play we’re trying;

– Always one to one movement, no teleporting, no snapping hands to objects
– Expanding the space beyond what’s physically possible with generating new rooms in front of the player
– Much more physical gameplay, some really satisfying interactions <3
– Shared screen (much like on Smash Hit Plunder) for players not in a HMD
– Multiplayer with networked DK2s joining in and out as they please