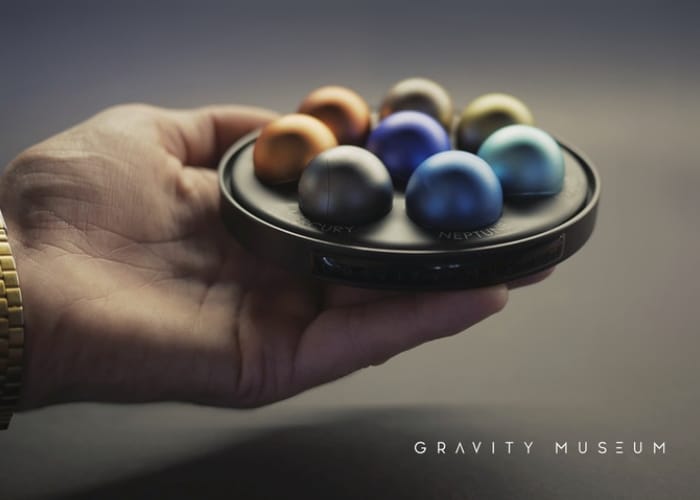 Space enthusiast Kristoph Krisjans has created a very unique desktop space exploration system called the Gravity Museum that allows you to compare the gravity between all solar system planets and explore our amazing universe from the comfort of your desk. Watch the demonstration video below to learn more about this unique desktop toy which is launched via Kickstarter this week with the aim of raising £20,000 over the next 30 days.

The Gravity Museum is a tabletop interactive collection of spheres that allow you to compare gravitational force between all eight planets of our Solar system, transforming physics theory into tangible experience and creating a unique way to explore and learn about the Universe around us.

Earth, Jupiter, Venus, Mars, Neptune, Uranus, Mercury and Saturn- all planets of our Solar System have different size, mass and gravitational force on them. We can only wonder how would it feel to actually experience different gravity. Following my passion for Space exploration I set a goal to design an object that could somehow materialize theory and present it in exciting way. I was caught by the idea of creating a tabletop display with gravity comparison between all 8 Solar system planets.

Clearly we can not change the actual gravity here on Earth. Though using the laws of Physics we have achieved a tangible result that creates an accurate idea of Gravity difference between other planets. The same object would have different weight on other planet due to different gravitational force- this principle is also used in the Gravity Museum. Each sphere is precisely calculated. They all have equal size but different weight that represents specific planet’s gravity. The main unit is the Earth’s sphere placed in the middle. Every other sphere precisely shows how would it feel to hold the same Earth’s sphere on other planet’s surface.

Gravity Museum is now available to back via Kickstarter with early bird pledges starting from just £70 and delivery expected to take place during March 2018. For full specifications and more information jump over to the official Kickstarter campaign page via the link below.