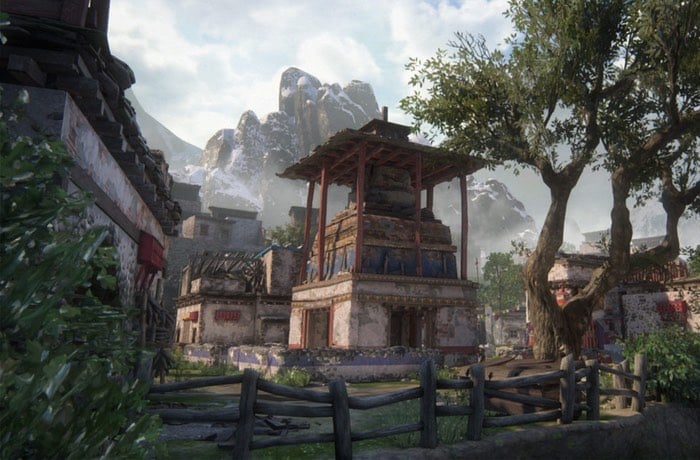 The new Uncharted 4 Bounty Hunters Multiplayer DLC has been made available today providing players with a number of new weapons, modes, boosts as well as mystical additions to enjoy as they battle it out online.

Just like the previous Uncharted 4 DLC releases such as Lost Treasures and all future multiplayer DLC updates, Bounty Hunters is free for all players to download. Check out the DLC trailer below to learn more about the new features.

Lead Game Designer Robert Cogburn explains a little more about what you can expect from the latest Uncharted 4 multiplayer DLC which is now available to download:

Two teams compete to reach the score limit by collecting Bounties from KO’d players. When you KO a player, they drop a Bounty worth 10 points, which you or your teammates must retrieve before an enemy can swoop in and deny it. Throughout the match, teams will also alternate between having one random player assigned the role of Captain — a high-value target that the opposing team must hunt down within a time limit.

If the attacking team can successfully KO the enemy’s Captain, they’ll have a chance to collect a huge Bounty worth 60 to 120 points toward their team’s overall score. However, there’s a catch: Captain’s Bounties take time to collect, so players must work together to either protect their teammates as they retrieve the Bounty or fight to deny the attacking team before the clock runs out.

We’ve also introduced a collection of new weapons and boosters, as well as a new Mystical, which can be obtained through DLC Gameplay Chests. Using Relics earned through Multiplayer matches and Challenges, DLC Gameplay Chests now have the chance of granting access to any of the four new weapons introduced with the Bounty Hunters DLC, as well as those added with Lost Treasures and as part of the base game. Our latest Mystical, Shield of Asgard, temporarily reduces incoming damage. While it can be helpful in objective modes, it comes at the cost of movement speed.

For more information on the new Uncharted 4 Multiplayer Bounty Hunters DLC jump over to the Official PlayStation blog website for details by following the link below.