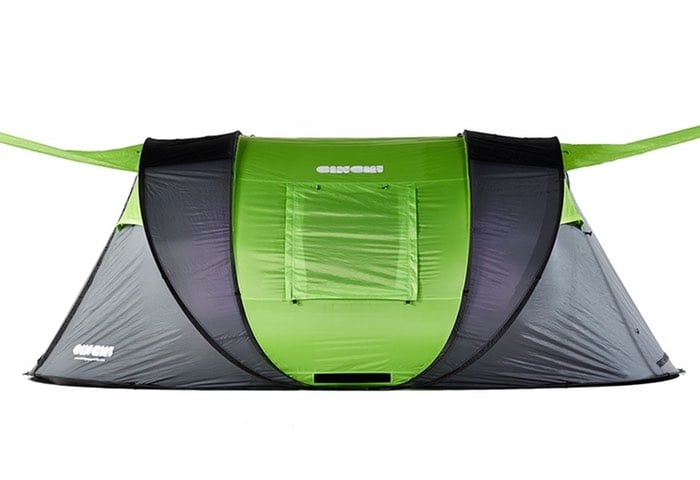 Jake Jackson has once again taken to Kickstarter to launch his next generation of pop-up tent, which includes a wealth of features to make your camping trip even more luxurious, including solar power, LED lighting and heat control.

This version of the Cinch pop-up tent includes extendable canopies, and a wealth of new tweaks, enhancements and features. Its creator explains little more about what you can expect from the latest design in the video below.

Two years ago, you helped us bring the ultimate pop-up tent to life – and show the big tent manufacturers that you don’t want to compromise on your camping adventures. We delivered our tent to hundreds of backers around the world, on-schedule, and the response has been amazing. But that was only the beginning.

Now we’re back with our next generation Cinch! – and thanks to your feedback, we’ve redefined “ultimate”. The new Cinch! has a heat-reflective cover, enhanced solar power, and an extended canopy that offers 75% more space – plus the size, quality and durability of a high-spec dome tent with more cool features, all of which pack down within a minute into a small disc-shaped rucksack.

Keep your mobile phone, speakers and USB gadgets charged-up with our optional solar power pack. Redesigned and upgraded for 2017, it now has three times the capacity of our previous model. The solar panel fits on the roof of the tent and connects to a 13,000 mA-h power bank inside, with two USB ports so you can charge two devices at the same time. The handy power bank stores enough electricity to charge an iPhone six times, and you can detach it and pop it in your pocket so you can keep your phone topped when on the move. If you’d like one, please add £70 / $100 to your pledge.

Jump over to Kickstarter To make a pledge for £170 to the early bird special to man Cinch pop-up tent via the link below.