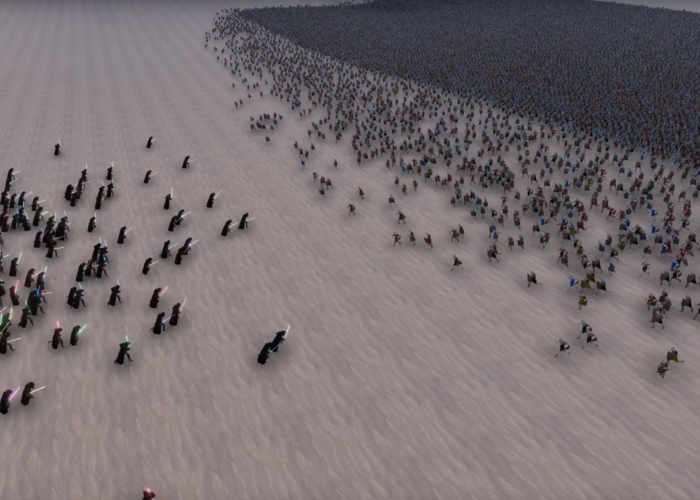 If you have wondered just how many Jedi from 300 would die in an epic battle against 60,000 medieval footmen, your wait is over as YouTube are SergiuHellDragoonHQ has used the Ultimate Epic Battle Simulator to put the question to the test.

In the video below you can also see a few tester warmup matches between less foot soldiers with the Jedi making easy work of ploughing through their ranks.

Here is a sandbox like no other. Create massive battles with absolutely no limits. Want to see 10,000 chickens fight an army of Romans?? Sure, why not. Want to see a company of WW2 U.S soldiers fight 11,000 Medieval soldiers?? There are simply no limits to the carnage you can achieve in Epic Battle Simulator. Mess around with a massive variety of units.

Everything from, Roman Centurions, Medieval soldiers, Knights, Orcs, Trolls, and yes, chickens! The main focus in this game is giving the player no restrictions to what he can do. That is why we decided not to limit the amount of units in battle. Want to see what a battle of 100,000 units looks like? We don’t recommend going past 10,000 for most machines but its your CPU, do what you want! On top of that, you can play as any one of the units in the game, getting up close and personal to help change the tides of a massive battle!

For more Ultimate Epic Battle Simulator battles jump over to the SergiuHellDragoonHQ YouTube channel via the link below.