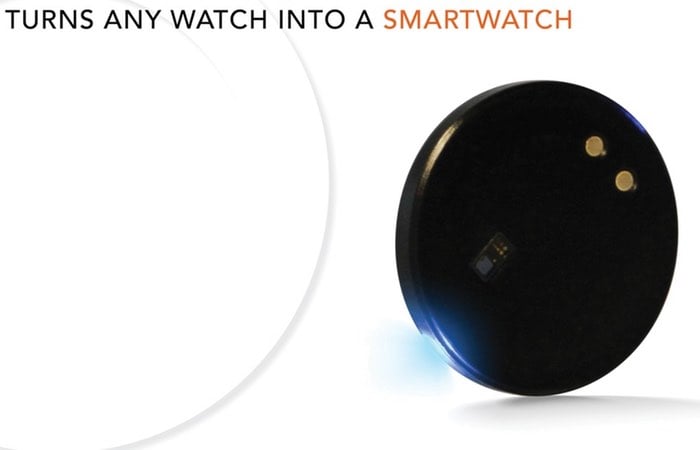 A new device has been created called Trivoly that takes the form of a small disc that is capable of transforming any normal watch into a smartwatch.

As you might have already guessed the slimline disc fits to the back of your existing analogue watch and provides a wealth of new features that include optical heart rate sensor, pedometer, notifications and more.

Smartwatches offer a new level of convenience. Great, but most people already have a watch! So why not smarten up your own watch? rivoly is a tiny disc which fits effortlessly and discretely underneath any watch. The disc works with the high-tech Trivoly app on your smartphone and is widely compatible with other apps.

Trivoly brings you enhanced Smartwatch features without compromising on the aesthetics and comfort of your favorite watch. With the Trvoly app you can easily set your preferred color and vibration pattern for each notification. There is even a discreet setting to customize your Trivoly to avoid unwanted interruptions, by filtering priority contacts and silencing others. Because sometimes, you just want to be in touch with a select few.

The Trivoly project is currently over on the Kickstarter crowd funding website looking to raise $100,000 in pledges to make the jump from concept to production. So if you think Trivoly is something you could benefit from, visit the Kickstarter website now to make a pledge from $99 for early bird backers and help Trivoly become a reality.