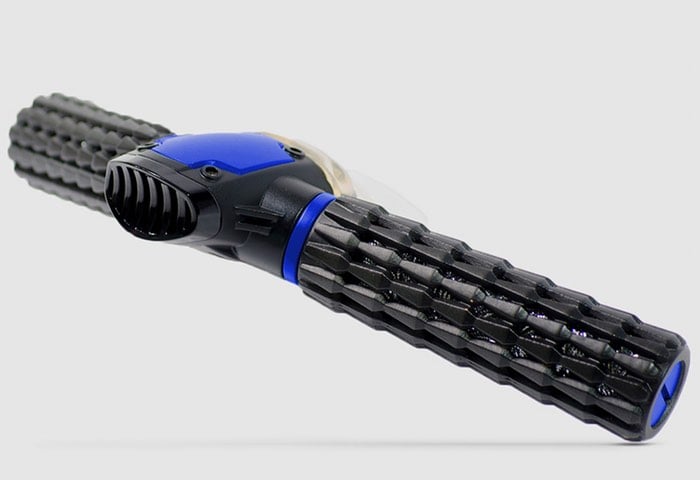 If you are looking to swim underwater for short amounts of time at relatively shallow depths, you may be interested in a new device called Triton which takes the form of the world’s first artificial gills and looks like something that would be used by James Bond.

The Triton artificial gills have been designed by a Swedish design company based in Stockholm and offers pocket sized underwater breathing apparatus that is capable of taking snorkelling to the next level.

Once charged the underwater breathing system is capable of allowing users to breathe underwater for up to 45 minutes at a maximum depth of 15 feet. Watch the video below to learn more about this revolutionary new concept which has taken to Indiegogo and has already raised over $830,000.

With Triton there’s no heavy equipment, complicated safety procedures or training. It’s easy to use, and no longer than a snorkel. Gently bite into the mouthpiece, breathe normally, and enjoy a sense of underwater freedom unavailable until now. Just imagine exploring gin-clear waters, alongside tropical fish, without bulky equipment or having to surface for air. We have a passion for exploring marine life. And we enjoy snorkeling. It’s fun, but limited. With Triton you’ll be able to explore with a new sense of freedom.

A charged battery enables 45 minutes of underwater pleasure. And with a maximum depth 15 feet, you’ll swim among marine life, rather than merely looking down on it. Triton empowers you with the ability to see and feel the vivid, sub-aquatic world close up. Triton employs cutting-edge technology to produce ‘artificial gills’. The Microporous Hollow Fiber makes breathing underwater possible.The holes of the threads are smaller than water molecules, they keep water out and let oxygen in. The micro compressor then extracts and stores the oxygen – allowing you to breathe naturally and revel in your underwater freedom.

For more information on the new Triton underwater breathing apparatus jump over to the Indiegogo website for details and to make a pledge from just $299 to be one of the very first to be able to breathe underwater using the Triton.