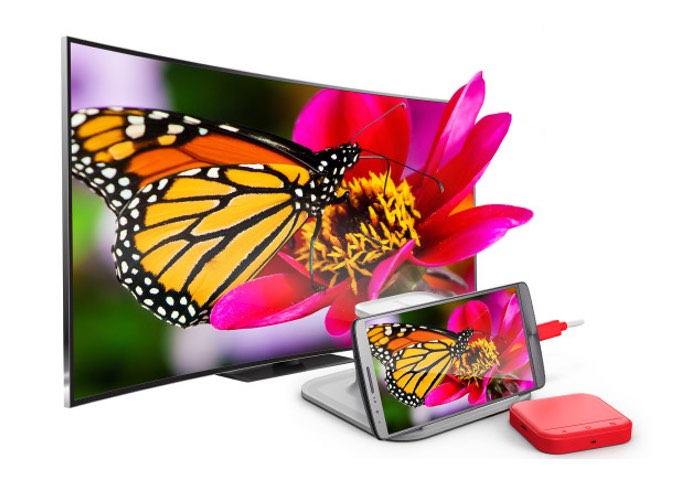 As smartphones become more and more powerful a number of companies are now developing devices to help use this power in different ways such as virtual reality, 360 degree video viewing as well the ability to use a smartphone as desktop computer while at your desk.

One company has now designed the SlimPort NANO.CONSOLE two allow your smartphone to help transform your TV into a smart TV.

Watch the video below to learn more about how the smartphone console functions from its developers and creators.

With your smartphone used as a powerful streaming device, and the NANO∙CONSOLE’s screen mirroring capabilities, you can drop your traditional TV subscription but not forsake your television-watching habits.

Enjoy on-demand multimedia from your smartphone on the big TV screen for a blockbuster experience. The NANO∙CONSOLE’s 4K Ultra HD video-out capabilities turn your device into a mobile all-in-one media powerhouse.

Your smartphone is capable of running games and apps equal to those on PCs and consoles.
Pair a Bluetooth game controller and transform your smartphone into a mobile gaming console. Now you can go head-to-head on the big screen with multiplayer-enabled games, the likes of which you never thought possible.

• Connect your SlimPort-enabled mobile device to any HDMI-enabled display. Click here to see if your device is compatible.
• Control your smartphone remotely from anywhere in the room.
• Charge your smartphone.
• Share your favorite media and apps on the big screen.

For more information on the new SlimPort NANO.CONSOLE jump over to the Indiegogo website for details via the link below to make a pledge from $34 for early bird backers.