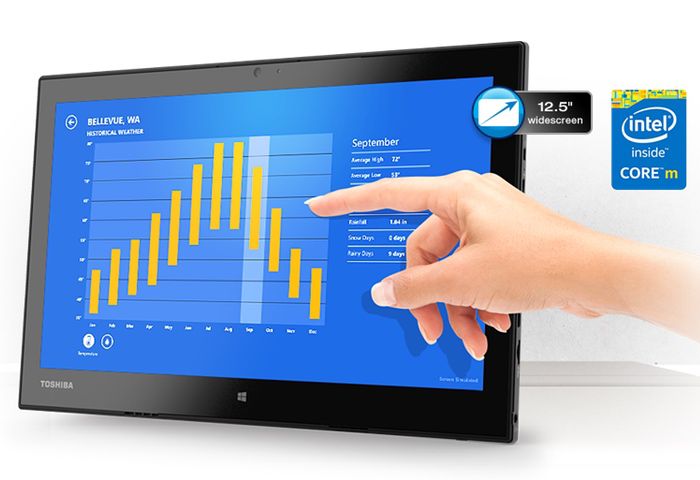 Toshiba has launched a new Windows tablet this week in the form of the Portégé WT20, that is now available to purchase price at $900.

The Toshiba Portégé WT20 tablet is powered by an Intel Core M-5Y10c Broadwell processor that is supported by 4GB of RAM and equipped with a 128GB mSATA solid state storage drive.

The Windows tablet that was first unveiled during CES 2015 comes preloaded with Microsoft’s Windows 8.1 Pro software, that I guess will include a free upgrade to Windows 10 when it launches towards the end of next month on July 29th, 2015.

Toshiba has fitted the Windows tablet with a 12.5 inch IPS touchscreen display that offers users a resolution of 1920 x 1080 pixels. Other features of the tablet include a micro HDMI port and micro USB port, together with a handy microSD card slot for further storage expansion when required.

The Portégé WT20 tablet is no lightweight when it comes to productivity, helping your mobile workforce push and ultimately shatter limits. Thanks to the fast, latest-generation Intel Core M processor, users can speed through tasks quickly, power through today’s most popular business applications and juggle multiple docs, spreadsheets and presentations with ease.

Connectivity is provided by Bluetooth 4.0 and 802.11ac WiFi, and the tablet weighs 1.6lbs and measures 12.2 x 7.9 x 0.35 inches in size. For more information on the latest Windows tablet edition to the Toshiba range jump over to the official website.