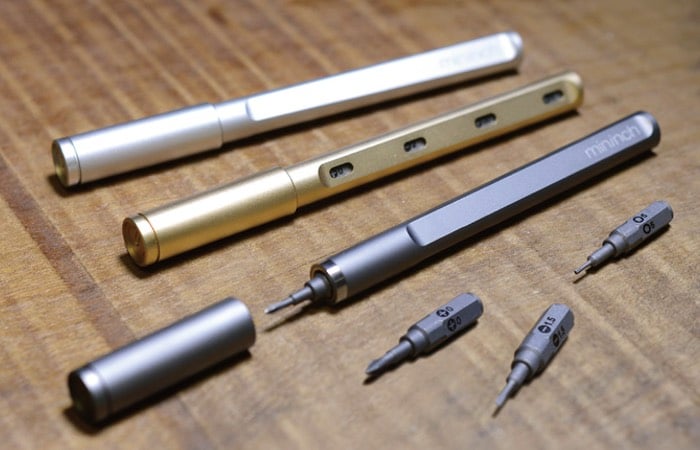 Mininch has created a new multitool call the Tool Pen Mini that they have launched over on the Kickstarter crowdfunding website and is built using the same high quality and precession craftsmanship.

The Tool Pen Mini has been designed to provide a pop-a-point design and builds on the teams previous larger design that successfully launched as the Tool Pen, back in August of last year and raised over $270,000 thanks to 4,614 backers.

“In prior amazing Tool Pen journey, many backers fed back that they desired the smaller or jeweler sized bits for fixing some electronics, intricate equipment, mobile devices, glasses, and wristwatch, to name just a few. We heard all your voices, and we obviously loved these ideas. Since then, we have begun studying how to shape the mini-sized version Tool Pen, and we’ve been tirelessly working away on developing it after the last project was finished.

As you imagine, these new mini bits are smaller and thinner than original ones which need the different type of mechanical & product design. Aside from that, lots of recessed screws on small electronics or some equipment are hard to be reached, thus a slender tip of the pen is quite necessary as well. After a rigorous assessment, we decide to create another sturdy, but svelte pen to handle all precision bits in the best way.”

For more information on the new Tool Pen Mini jump over to the Kickstarter website for details via the link below and make a pledge from $45 to be one of the very first to own one.