Skateboard addicts are indeed having their hard time doing their tricks on grassy lands using their standard wheeled boards. But they should problem this dilemma no more; since Rockboard will be releasing soon an all-terrain board that features not wheels but tank-like treads instead. 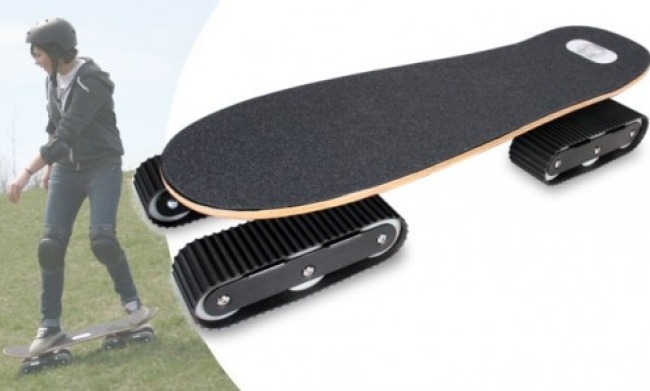 The newest board is called the Descender. While this may not give you the speed and the thrill as same as your regular skateboard, this stuff might give you a different kind of feel.

There are no specific details yet except that the Descender board measures at 31 x 10 x 5 inches. As well as if you are 200-lb or less, then this board can definitely take you.

The board has 36 heavy-duty wheels in total since it has four triple-wheel sets. Every wheel set is covered by a rubber treat that will perfectly take you to grassy terrains and even in smoother grounds.

The Descender was voted best in Play by Parenting Magazine and it appeared first during the Toy Fair in New York held last February. The retail price is $120 and replacement parts will soon be available after the Descender becomes officially available in the market.

If you enjoyed this article you might also be interested in the newly created Onewheel self-balancing electric skateboard which took to Kickstarter to make the jump from concept to production.