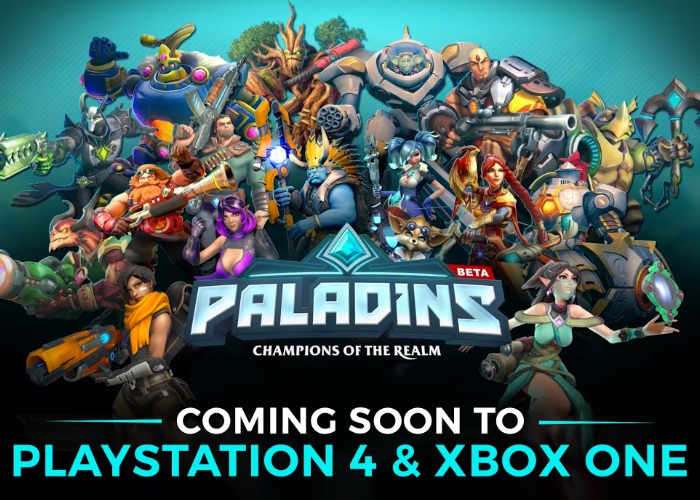 Rory Newbrough Lead Designer for the development team creating Paladins, Has today revealed more details about the closed beta development stage which is now underway ahead of the game’s launch on Xbox One and PS4.

Together with explaining how PlayStation 4 Paladin teams can qualify to compete in DreamHack Valencia this July for a shot at the $50,000 prize. Check out the official trailer below to learn more about the new Paladins game.

Never heard of Paladins? It’s a fantasy, team-based shooter. It’s a world of knights with flamethrowers, dragons with rocket launchers, and furry alchemists who turn enemies into chickens. As you can probably tell, we don’t take ourselves too seriously.

But Paladins is a game that has a lot of depth and customization compared to other hero shooters. It’s a game where you can play how you want to play. You can build your own loadout of cards to amplify and augment each Champion’s core set of abilities, so he or she becomes exactly the Champion that you want to play. And your Champion looks exactly how you want him or her to look, thanks to our multi-part skin system.

As a welcome gift to new players dying to get into the Realm, you can get the Founder’s Pack for just $15 through March 28. That’s 25% off… and PlayStation Plus members will get an even better discount!

• You get instant access to Paladins (plus all the Champions we ever release, forever) when you buy the Founder’s Pack for just $15 — 25% off the normal price!
• Paladins console esports starts now. And we’re sending the two best PS4 teams to Spain to participate in DreamHack Valencia 2017.

The Founder’s Pack doesn’t just give you Closed Beta access. It also includes:

• Every Champion we ever release. Ever. Forever.
• A Beta-exclusive Skin Collection and Mount.
• 10 Radiant Chests, each containing Cards, Skins, and more.
• 72,000 Essence to craft the cards you want.
• A Paladins-themed skin for Ares in Smite on PS4.

For more information on the new Paladins Closed Beta which starts today jump over to the official PlayStation website for details by following the link below.