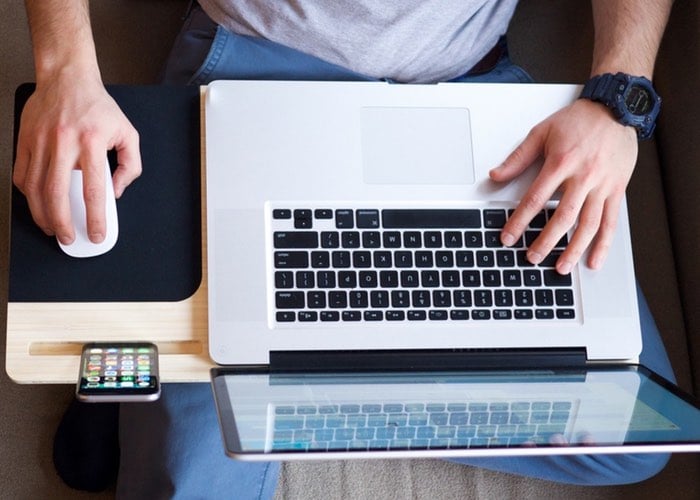 Laptop users that would like ditch their desk and use something a little more portable, that is both affordable and environmentally friendly.

Maybe interested in the LapPad that is CNC machined from Bamboo the most renewable and fast-growing wood on the planet, says the creators of Lappad. Watch the video below to learn more.

Being mobile has taken a whole new meaning these days. If we’ve come so far in the technology side, why are we still stuck sitting at a desk to get things accomplished? This is why we developed a mobile desk for productivity, one that’s made to work directly with the technology you already use. Introducing the LapPad, a highly functional mobile workstation that’s going to make you love takin’ care of business. Anywhere (yeah, literally anywhere).

The LapPad is made from strong, durable cross-woven bamboo and has been designed with comfort and ergonomics in mind. It has a built-in carrying handle, enough space for up to a 17-inch laptop and not one, but TWO docks so you can do your work (update your Facebook) from your tablet AND use your smartphone to check out the cutie who liked your Instagram of the bagel you just ate. AT THE SAME TIME. Hey, you’re busy as long as you feel busy, right? Right.

As you know, (despite how friendly their name sounds) laptops emit heat when you’re using them. Like, the equivalent heat of a small sun, or a dying star. And unless you want to look like you just grilled a bunch of chicken on your drumsticks, you’re going to want something that dissipates heat. Because the LapPad is made from a well-finished ¾’’ bamboo sheet, it not only reduces heat but also absorbs it, leaving you with cool legs and a solid workstation to get things done on.The LapPad team has literally been using this workstation throughout the entire Kickstarter campaign setup.

To make a pledge for the Lappad jump over to the Kickstarter website via the link below.