Thermal spas have a long history and remain favorite destinations among the health-conscious, those who seek natural solutions to their ailments. When it comes to downtime for rest and relaxation, Germans don’t mind spending it in a spa. But something else has risen in Bad Essen: an entire resort blessed with smart design and a host of excellent facilities. It’s more than a spa, it’s a spa plus. 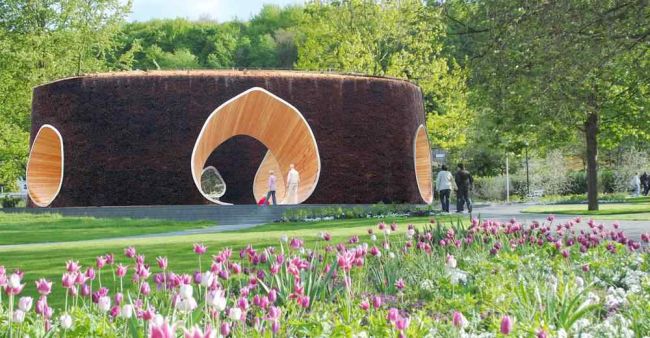 Seen above is the Sole Arena, a marvel of wooden construction where patrons go inside and breathe air impregnated with salt. Sounds strange? It is strange and there’s an interesting back story behind it as well.

The idea for the Sole Arena came from local history. Turns out Bad Essen, a place renowned for its thermal springs, was also a salt production center for ages. As early as the 1900s the aerosols in the air were proven to aid those suffering from respiratory illness. Thus, Bad Essen earned its reputation for excellent health spas.

The Sole Arena, which was built between 2009 and 2010, is a 100% wooden construction with three entrances. Patrons who stay inside are treated to air heavy with salt. No idea how that would actually feel in person, but it sounds like a novel experience.

It’s also smack dab in the middle of a lovely park with adjoining health facilities.