In what amounts to fashion treason and an assault on rationality, a new strange form of garb is being showcased across the web. It’s called a Privacy Shell and its name leaves nothing to the imagination—imagine a shell you cover yourself with in crowded places. As for the couple downstairs sharing each other’s company inside a shell, well, we have no idea what they’re doing under there. 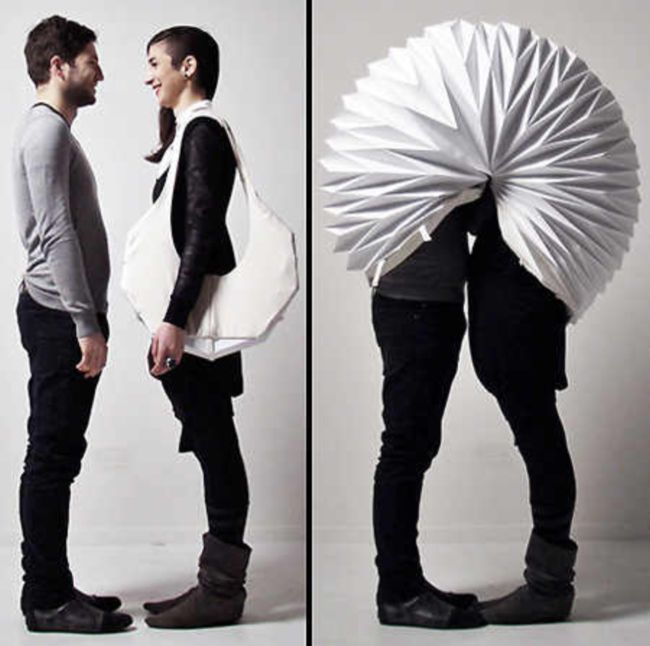 Equal parts fashion statement and accessory, there’s a smaller version of the Privacy Shell that works like a hood-helmet. Hood-helmet? Uh, a little hard to explain but it’s worn around the neck, folded, and can e used either as a hoodie or a full covering helmet.

If this Privacy Shell be a flagrant assault on good taste, then thank your favorite pair of skinny jeans that it’s a concept for now. The Privacy Shell might be more useful as a fashionable umbrella though. Imagine walking around in the pouring rain protected from the wetness by a bubble with eyeholes. Brilliant. We applaud ourselves.

The most interesting part of the Privacy Shell is its folding features. This is really commendable. As the picture up north shows, it could be shrunken down to a handbag when not deployed. Other than a secluded escape from public view, the Privacy Shell, if a little larger, could work as an instant hobo home. As in a shelter for the homeless on a sidewalk.