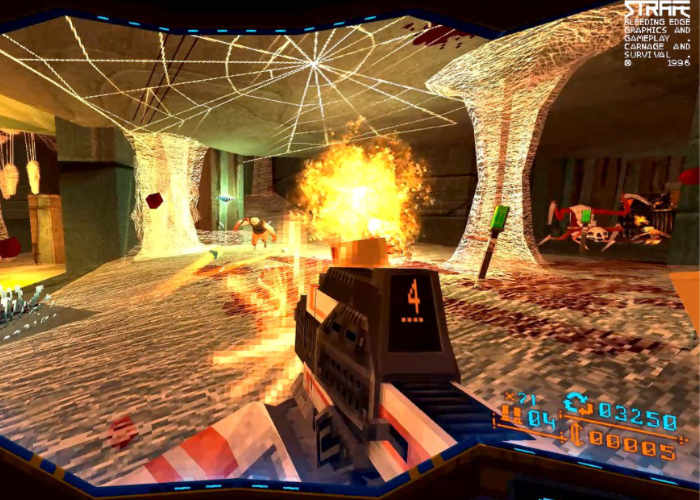 Thom Glunt from developers Pixel TitansHas this week announced that their new game Strafe will be launching on the PlayStation 4 sometime early in 2017 bringing with it plenty of blood and gore.

As well as announcing the games launch a new gameplay trailer has been released for Strafe in the form of Uber Gore 2.0, which provides a good indication of what you can expect from the game when it launches on the PlayStation console.

Director Glunt explains a little more about what you can expect.

Strafe is a roguelike first-person shooter that’s pushing the limits of computer-generated photorealism and hardcore sci-fi action into unimaginable territory. You’re a Scrapper on an impossibly dangerous mission at the edge of the galaxy. You only have one life to navigate all the nightmarish terrains of Strafe. When you die, nothing will ever be the same again.

The game is fast and dynamic with more than 30 weapons and 20 bloodthirsty enemies, but I wanted to cover the persistent gore in this blog post. Gore is special in Strafe and we are working hard to make our gore systems second to none.

We spent a lot of time working on the blood and gore in Strafe because we feel that it’s important for the player to leave their mark on a level. After a firefight it’s awesome to see the mess you’ve made and it’s rewarding to know that every splash of blood represents a challenge you’ve overcome.

The gore is also great for telegraphing where you’ve been. Since the blood and gibs never fade away you have a breadcrumb trail of carnage that helps you prevent backtracking. Lastly, the persistent gore opened up new gameplay possibilities with acid-based enemies. These enemies bleed acid that will burn the player if they stand in it. So avoid it at all costs or cover it up with the blood of another enemy to make a safe path!