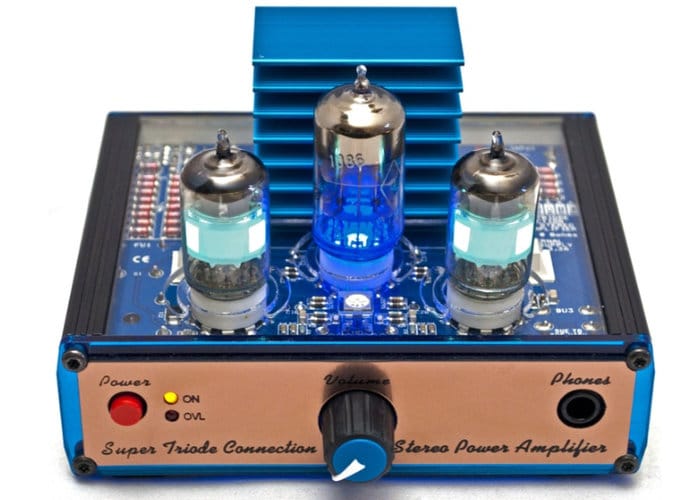 Juergen Grau located in Rohrbach, Germany has designed and created a new STC Super Triode connection power amplifier Mk II Bausatz which has this week launched by a Kickstarter to raise the required funds it needs to make the jump into protection. With pledges available from €329 or £288 the project is hoping to raise just €4,500 over the next 30 days.

Juergen explains more about the inspiration and technology used in the power amplifier. “In the late 90’s the Japanese Shin-ichi Kamijo created special circuitry for tube amplifiers to bring the rough sound of a Pentode power amplifier closer to the soft sound quality of a Triode stage. This was archived by adding a kind of “non-linear negative local” feedback by supplying a small amount of the modulated Anode voltage from the power Pentode before the putput transformer to the Anode of the preamplifier’s Triode.

The special feedback circuitry results in: 1st: The triode now “sees” the limited frequency response and distortions due to the modulated Anode voltage of the Pentode. The feedback circuitry adds these errors to the audio signal. Due to the 180° phase shift of the inverting power amplifier stage (negative feedback) these distortions will be eliminated and the frequency response is flattened. In a way, the Triode “supervises” the Pentode power amplifier stage. 2nd: Normally the feedback path is connected to the Triodes Grid but in this case it’s connected to the Anode so the Triode “sees” only the Pentode’s distortions (and eliminates it) but not its own harmonic distortions.”