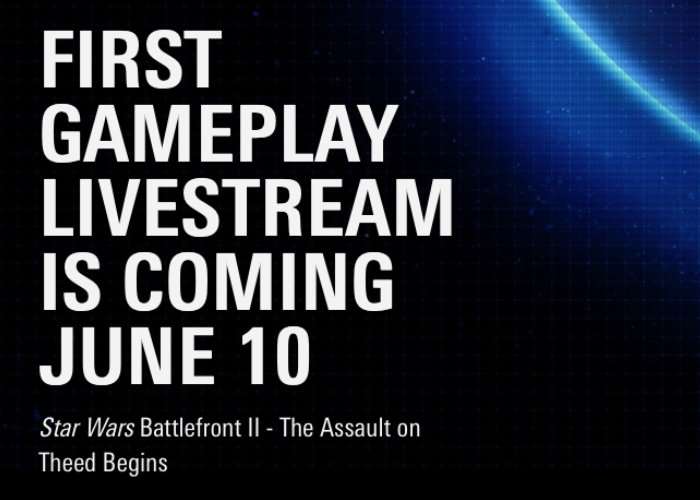 Before the EA PLAY doors open will be a mix of your favourite Star Wars Battlefront II Game Changers, YouTube stars, Twitch streamers, and more says EA over on the official blog.
EA explains more :

Sleek N-1 Starfighters and Vulture Droids scream overhead spewing light and fire. Nimble AT-RT Walkers race around corners, pursued by roaring AATs. Agile Clone Jumptroopers hop from rooftop to rooftop, while rampaging B2 Super Battle Droids level everything in their path. Armies of Clones and Droids sprint across cover, their blazing weapons shattering the tranquility of the once-peaceful capital of Naboo. And at the center of the swirling melee the lightsabers and Darth Maul and Rey cut swaths through the ranks of the battling troopers.

Prepare for the Assault on Theed! On June 10 at 12:30 PM PT, Darth Maul and other cross-era heroes enter the battlefield in a massive multiplayer livestream gameplay event you won’t want to miss. You might even become part of creating it.

At EA Play, you’ll be able to watch the first-ever live gameplay reveal of Star Wars ™ Battlefront ™ II, featuring livestream of 40-player gameplay set during the Assault on Theed – one of the new multiplayer battles from the prequel trilogy. Clone Troopers will mount a desperate defense against the invading forces of the Separatist Battle Droids. Can the Republic forces stop the relentless crawl of the massive Multi-Troop Transport as it lumbers toward the palace doors?

They’ll be forming two teams of 20, led by StoneMountain64 and Neebs Gaming, to play the game in front of the world for the first time. No pressure, right?