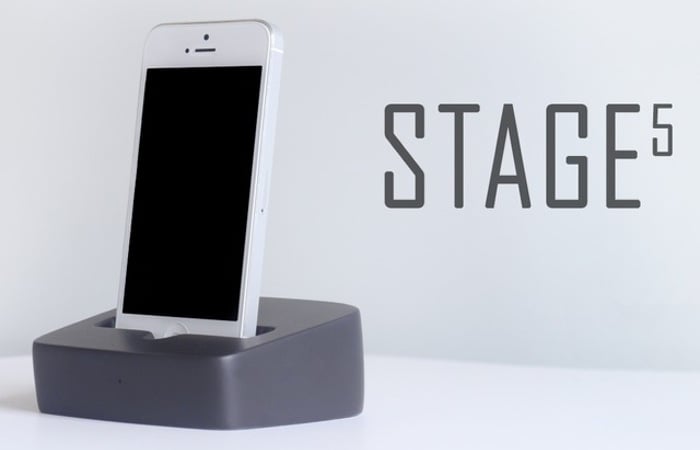 Whether you are apple iOS devices or Android tablets and smartphones you might be interested in a new smart dock called the STAGE 5 Dock, that has been created by Rocket Sound Systems, to be compatible with pretty much every smartphone and tablet on the market.

The new STAGE 5 Dock supports Apple Tablets, iPhone 6, 5S, 5C, 5, 4, devices as well as Samsung, HTC, and Windows Phone smartphones and tablets. Watch the video after the jump to learn more about the STAGE 5 Dock project and see it in action.

The team responsible for the STAGE 5 Dock are also in the process of developing a Stage 5 control application to add extra functionality to the Stage 5 Dock. They explain a little more :

“The idea of multifunctional smartdock came to us while we were trying to find a docking station which had an acoustic system, looked good and at the same time was reasonably priced.

Currently the choice of docking stations is quite extensive. Nevertheless, each has a clear weakness or several of them: Supports only one smartphone brand, Does not have a sound system or has a very weak one, Is visually unappealing or made of plastics and Poor value with big name brands.

Thus, at the lunch table first sketches of our Stage5 dock were born. We did not want to go for a simple piece of metal with built-in sound device. Instead, we created a next generation dock.”

The STAGE 5 Dock project is currently over on the Kickstarter crowd funding website looking to raise enough pledges to make the jump from concept to production.

So if you think STAGE 5 Dock is something you could benefit from, visit the Kickstarter website now to make a pledge and help STAGE 5 Dock become a reality.