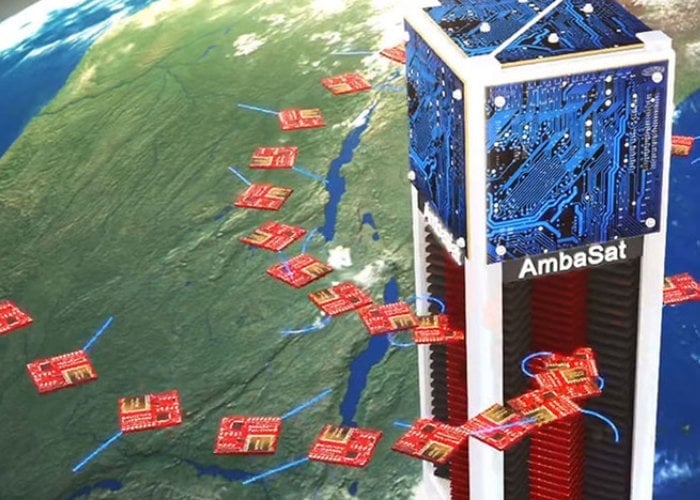 AmbaSat-1 is part of a new generation of satellites known as Sprite satellites. They are tiny spacecraft measuring 35 mm square and just a few millimetres thick. Pioneered by the original KickSat, the compnaies goal is to launch groups of AmbaSat-1 satellites onboard a commercial rocket. By shrinking the spacecraft, up to 200 satellites can be launched at a time, reducing costs.

“Once your satellite kit is assembled and programmed, it will be launched onboard a commercial rocket which will deploy your satellite into Low Earth Orbit, where it will spend up to 3 months in space. It’s a kit, it’s fun, it’s educational and we need your help to make it happen.“

“AmbaSats are just a little bigger than the size of a couple of postage stamps but have solar cells, a LoRaWAN radio transceiver, microcontroller (an Arduino compatible ATMEGA 328P-AU), memory, a gyroscope, accelerometer, magnetometer as well as a range of other sensor options. Making use of The Things Network (TTN), AmbaSats are capable of transmitting data to over five thousand Earth-based TTN receivers (Gateways) which are spread around the whole globe. No specialist radio receiving equipment is required, your data appears over the internet directly to your AmbaSat Dashboard.”

To make a pledge to own your very own programmable spacecraft jump over to the official Kickstarter project page by following the link below.