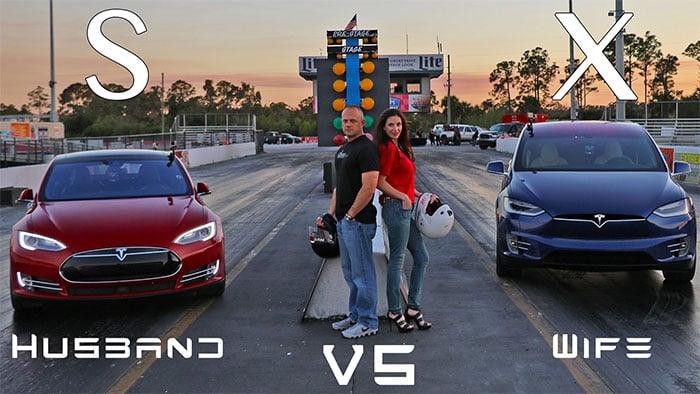 We know that the Tesla Model S has a cool insane mode and Ludicrous mode that turns the electric vehicle into an impressive drag racer. A husband and wife took to the drag strip in their Tesla vehicles for some racing action. The husband is in a Model S P90D with the wife in a Model X P90D.

The two vehicles share the same powertrain, but the big difference is that the Model X weighs 600 pounds more than the Model S and has the aerodynamics of an SUV or brick. The drag race went down at Palm Beach International Raceway and the cars were topped off at a Supercharger location 15 miles from the racetrack.

Both cars uses Max Battery Power mode and launch mode and both cars were charged at the 40 amp RV outlets at the track. The drag race results can be seen in the video below. The Model X ran an 11.61 at 116mph making it the world record holder for fastest production SUV. The Model S ran a best of 11.3 at 116mph putting the two vehicles much closer together in performance than expected.