Spotify has announced a number of new features for the music streaming service, which includes a new Spotify Platform with apps, and Spotify has teamed up with a number of companies to bring around 12 different apps at launch. 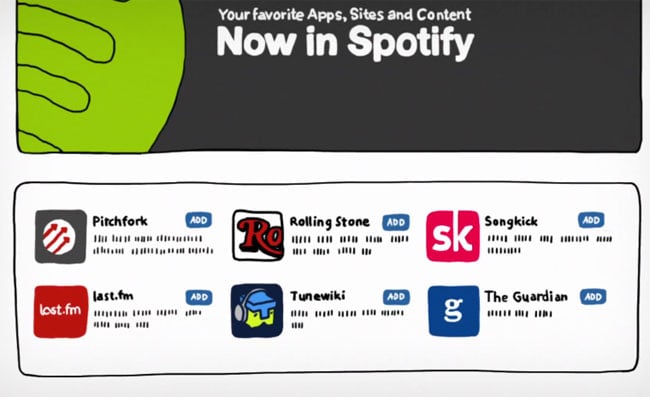 The first generation of Spotify Apps features 16 partner apps, with 12 available from launch today. We’ve been lucky to partner with some of the brightest and best brands in the world to create engaging, fun, and social apps.

The 13 global partners launching on the Spotify App Finder include Billboard, Fuse, The Guardian, Last.fm, Moodagent, Pitchfork, Rolling Stone, Songkick, Soundrop, TuneWiki and We Are Hunted, with Top10 and ShareMyPlaylists apps coming soon. We also have three Nordic partners launching local apps, including Tunigo in Sweden which launches today, Gaffa in Denmark and Dagbladet in Norway, which will be launching local Nordic apps soon.

Have a look at the video below which shows how apps will work with Spotify, and developers will now be able to create applications for the Spotify Platform.