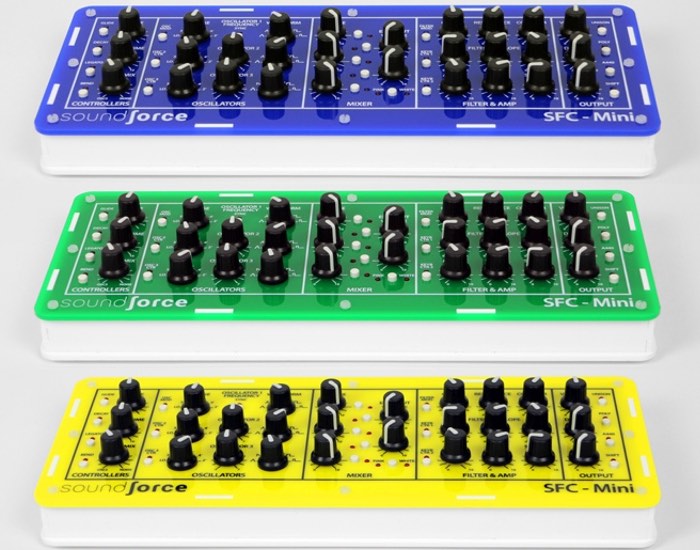 Nicolas Toussaint has taken to Kickstarter to promote his new SFC-mini controller in the form of SoundForce which requires €15,000 over the next 30 days to make the jump into production.

SoundForceOffers a hardware controller for the software alternatives of the legendary synthesiser and for Mini-V/Monark plugins and more.

The hardware controller consists of 22 x rotary pots, 21 x tact switches and LEDs, 6 x 6-positions switches and is a USB-powered class compliant device. Watch the video below to learn more from its creator.

The SoundForce SFC-Mini is a USB controller for your Mini-style synthesizer plugins. USB-powererd, class compliant (plug&play) and compatible with Win/Mac/iPad. Get hands-on control of your software synthesizer and bridge the gap between hardware and software!

The SFC-Mini firmware is open source and can be edited and compiled using the Arduino IDE. The compiled .hex file can then be uploaded to the 32u4 chip using the Atmel flip utility on Windows. Future firmware upgrades will be provided as both Arduino project files and compiled hex files. Ideal if you want to customise your controller or learn to program with Arduino. I will give certain backers a video tour of the Arduino code and explain how it works. See the rewards section for more details.

From the start, the goal of SoundForce was to produce locally and to support the economy in my local area. That’s why the SFC-mini is Made in Europe and assembled in the Netherlands. The PCBs are ordered through Eurocircuits in Belgium and fabricated in Germany. The enclosures are made at Fablab Enschede (where I work) and get screenprinted at Duotone in Hengelo (a city nearby). The enclosure material is acrylic plastic made in Italy. Electronics components (LEDs, switches, pots ,… ) are traditionally produced in Asia.

– Support for Ableton, Logic, Pro Tools, Bitwig, Cubase, Reaper and much more
– Easy setup with pre-mapped preset for Mini-V/Monark
– Custom firmware for Minimonsta (as the MIDI map is fixed in the plugin)
– Also compatible with the iMini iPad app
– Can be used with any other MIDI-mappable software
– Open-source Arduino-based firmware

Jump over to the Kickstarter crowdfunding website via the link below to learn more and make a pledge from $165 for early bird backers. If you liked this you might also be interested in building an Arduino wind speed meter which offers an easy way to start tracking wind speed using an Arduino Uno.