SmartScreen is an applictaion for the iPhone and iPod Touch that lets you place informational widgets on your iPhone’s lock screen, and the widgets have a similar look to the ones on Apple’s dashboard.

The SmartScreen iPhone App has been developed by a company called MediaPhone, who will also be releasing an SDK for it so users and developers will be able to program their own widgets, check out the video of it in action after the break. 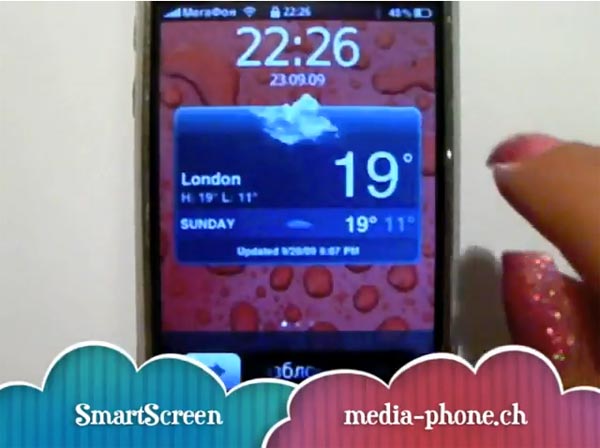 The application will work on all models of iPhone and iPod touch that run OS 3.x, unfortunately due to the nature of the product it will not be available for purchase in the Apple AppStore but will be sold to customers of jailbroken phones via alternate means.

A SmartScreen SDK will be available to everyone in November 2009 but widget developers are being selected to participate in a Beta programme.

We wont see SmartScreen in the iPhone App store anytime soon, if you want to use it when it is released you will need to have a jailbrokemn iPhone, head on over to MediaPhone for more details.

The SmartScreen iPhone App is now available to download, full details at the link below.