As well as officially announcing they have now sold more than 100 million copies of their latest Windows 8 operating system, Microsoft have also announced this week that their relatively new SkyDrive cloud storage service has now passed 250 million users.

Microsoft SkyDrive, which was previously known as Windows Live SkyDrive and Windows Live Folders, provides a cloud file hosting service that allows users to upload and sync files to cloud storage and access them from a Web browser or mobile, laptop or desktop device. 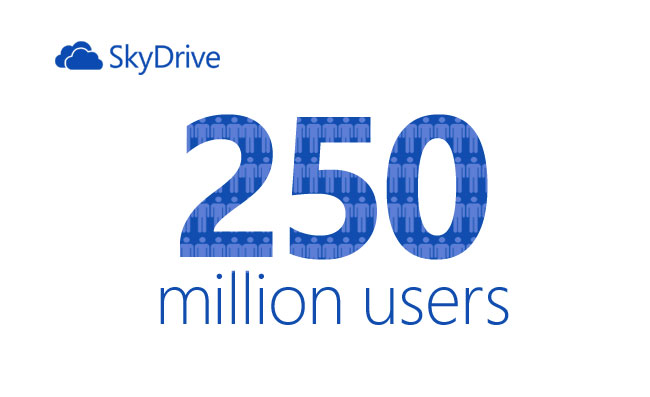 Microsoft explains a little more about the development of their SkyDrive cloud storage services and its links with Outlook.

“In just the past few months we’ve made SkyDrive the default save location for the new Office, updated the SkyDrive app for iOS, and made substantial performance improvements to SkyDrive uploading. Recently, we also announced that Microsoft accounts have grown to 700 million, that we’ve improved the security of our service with things like two-step verification, and that we now have Extended Validation Certificates integrated on SkyDrive.com.

And a few days ago, our friends over at Outlook.com announced that they’re rolling out a new feature that allows you to insert anything from your SkyDrive directly into an email message. We continue to push forward to a world where all your stuff is in SkyDrive, so you can always have it with you.”

For more information on the new SkyDrive and to view a handy infographic jump over to the Microsoft blog website for details.